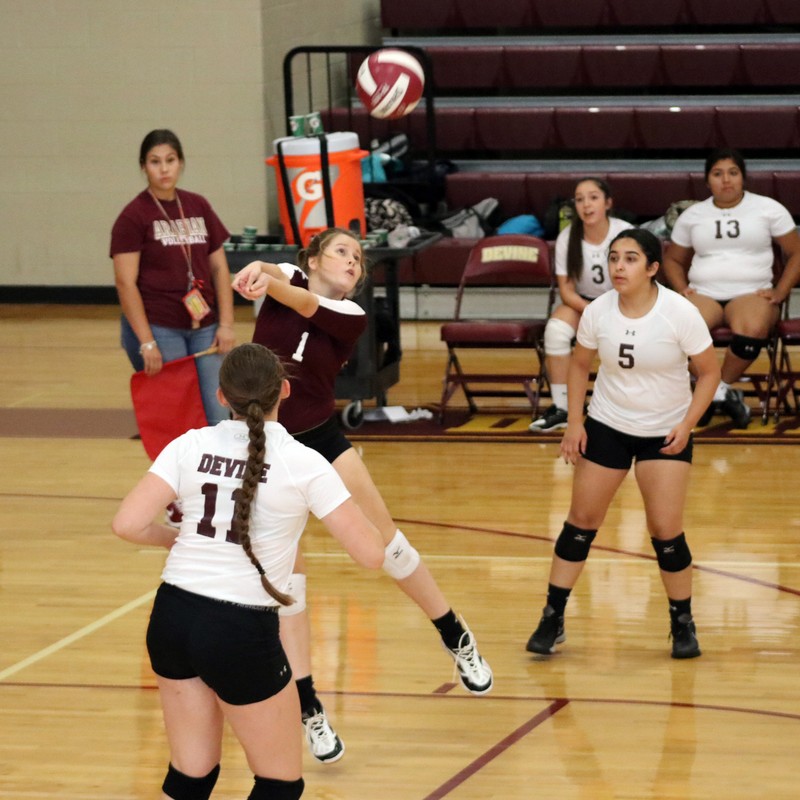 In the Devine JV tournament last weekend, the JV Arabians won second after three hard fought matches. They won every game except the final match up against Pleasanton for the championship.
Their first game started at 8am against Poteet with a slow start and a loss in the first set 18-25. The JV team woke up and fought hard to win the next two sets and the game 25-21 and 17-15. Allison Taylor had 3 kills, Isellia Gutierrez 3, Heidi McLaughlin 1, Halle Hagdorn 1, Sydnie Harrell 4, and Kennedy Duncan 4 kills, Taylor 5 aces, Brooke DuBose 2, Gutierrez 2, Myla Miles 2, and Allison Stevens 4 aces. Hagdorn had 2 blocks and Taylor 1 block.
Right after Lytle lost to Poteet, they had to face a fired up Arabian team. As soon as Devine got a few points, Lytle couldn’t recover and both games ended quickly 25-12 and 25-14. Hagdorn had 1 kill, Harrell 6, Gutierrez 1, Janae Wofford 3, Kennedy Duncan 1 and Taylor had 1 kill. Stevens had 6 aces, Taylor 3, DuBose 5, McLaughlin 1, Destiny Morales 7, and Miles 1 ace.
In the championship game against Pleasanton, the Arabians met their match. Pleasanton came out strong after beating Pearsall and Uvalde in pool play. They took the lead early and Devine tried hard but could not catch back up. Doubt and lack of communication really hurt this team but they still made Pleasanton work for their wins at 18-25 and 19-25. Taylor had 2 kills, Wofford 2, Duncan 2, Harrell 4, Moralez 1, and Gutierrez 2 kills. DuBose had 2 aces and Moralez had 1.
“Overall this was a successful tournament for s as the girls did much better on our volleyball skills and energy. We just need to keep that energy and communication throughout the entire game; the championship loss was due to moments of doubt and hesitation that allowed Pleasanton to edge us out of our momentum. I am pleased with our progress and from Saturday and look forward to next week’s competition.” Coach Megan Perez
The JV Arabians record is 3-7 after the tournament and they will face Fredericksburg on Friday and then will head to the Navarro tournament next.
By Dicy Chambers
Sports Writer