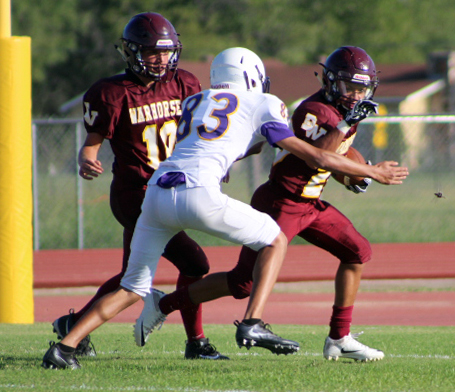 Points galore were put on the board last Friday night at Warhorse Stadium as the JV Warhorses dominated the San Antonio Brackenridge Eagles by the final score of 54-32. Devine surged ahead 38 to 8 and withstood a valiant comeback effort by the Eagles in the second half.
Scoring for the second week in a row off an opponent’s turnover to get Devine going was Chase Lawson with a 60-yard interception return for a touchdown to put the Horses up 6-0 as the two-point attempt failed. Jose Espinosa was the next Devine defender to get into the end zone with a fumble return of 45 yards for the score. Getting a key block on Espinosa’s run was defensive lineman Tristan Kennard on the Eagle quarterback. Add Lawson’s two-point conversion run and the Horses were up 14-0.
Donavon Camacho burst loose for a 50 yard touchdown and added the two-pointer to put Devine up 22-0. Demetrios Monreal was able to get in some great conditioning on the next Devine touchdown. Monreal scooped up an Eagle fumble and sprinted 99 ¾ yards (according to Coach Taylor) to thwart a Brackenridge touchdown opportunity and add to Devine’s lead. Sergio Martinez scored on the extra point gate play to put the Horses up 38-6.
Over the next phase of the game, Brackenridge narrowed the score to 38-24 before Martinez hit pay-dirt once again, this time from 35 yards out. Lawson tacked on the 2-point conversion to give the Warhorses a little more breathing room at 46-32.
The last touchdown in the high scoring affair was Martinez’s second touchdown of the game. He ran in from the 12-yard line to finish off the 54-32 ballgame.
The offensive line group consisting of Mason Perez, Jesus Hernandez, Cesar Rodriguez, Isaiah Rejino, Kyle Hidalgo, Cameron Schreck, Darren Lafferty, and Joseph Ramirez along with tight ends Chris Wilcox and Kannard made wide running lanes for the offensive backs to gain much of their yardage.
According to defensive coordinator Coach Scott Taylor, “We did a good job but there is always room for improvement. We gave up to many points in the second half.”
Devine is now 2-0 on the season and will travel to Marion Thursday for a 5:30pm kickoff against the Bulldogs.
By Jerel Beaty
Staff Writer