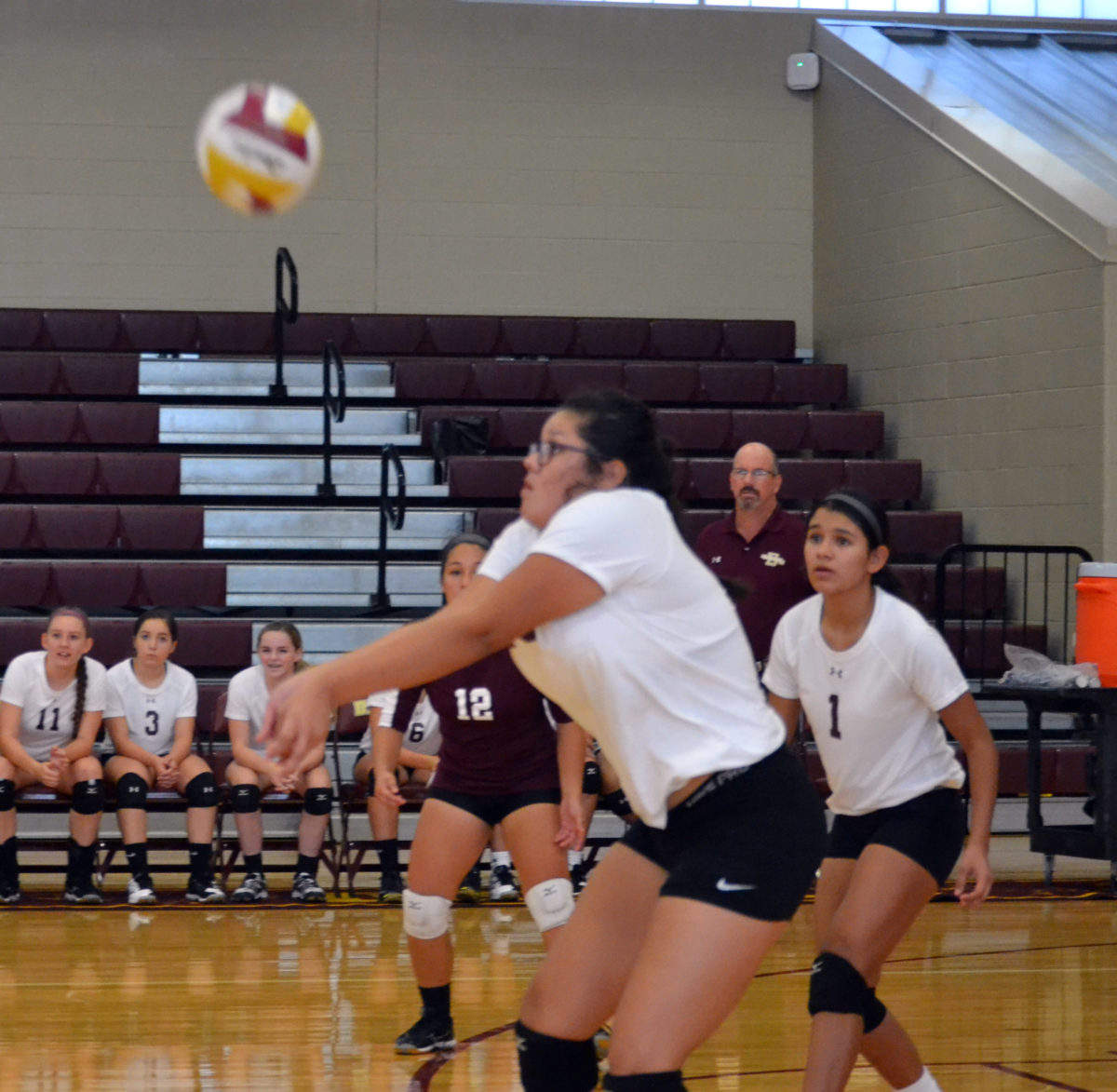 The JV Arabians played against three tough teams recently; Fredericksburg, Antonian, and Pearsall. They put up a tough fight but lost two and won their first district game.
“We made some outstanding plays,” Coach Mark Mangold said. “With more consistency, we will have more victories.”
Fredericksburg
The JV girls played Fredericksburg on September 15th at Fredericksburg, losing in three games: 9-25, 25-27, and 5-25.
The JV girls had many kills; Halle Hagdorn 3, Clarissa Zamora 2, Jasmine Pompa 2, Makayla Waddey 1, and Janaee Wofford 1. Assisting were Brooke Runyan with 3 and Wofford with 1. They had 3 aces; Myla Miles, Runyan, and Wofford each with 1.
Defensively scoring digs were; Sara Moreno 13, Runyan 10, Destiny Morales 5, Miles 3, Wofford 2, Kaylee Howard 2. Sydnie Harrell supplied the only block of the game.
“Give credit where credit is due,” Coach Mangold said.
Antonian
On September 19th the JV girls faced Antonian there, losing in two games: 5-25 and 12-25.
Offensivley, they had 3 kills; Pompa, Kelsey Archie, and Hagdorn each with 1. With the assists were Runyan and Wofford.
They had 19 digs; Moreno 10, Miles 3, Runyan and Howard each with 2, and Wofford, and Waddey each with 1.
“Antonian is a very elite JV volleyball team and we had to earn every point,” Coach Mangold said. “We did a lot of good things tonight but just couldn’t take the constant pressure. District starts on Friday and I believe our tough schedule will start to pay off.”
Pearsall
On September 22nd the JV Arabians were able to beat Pearsall in two games: 25-9, 25-23.
Offensively, they scored many kills; Pompa 6, Archie and Harrell 3 each, Hagdorn and Zamora 2 each, and Runyan 1. There were two girls who assisted, Runyan 10 and Wofford 4. They also had some aces; Pompa 5, Rodriguez and Moreno 2 each and Runyan 1.
Defensively, Moreno and Morales led with 3 digs each, followed by Wofford, Howard, Rodriguez, and Pompa with 2 each and Runyan with 1. The only block of the night was made by Archie.
“We had a great start to our district season,” Coach Mangold said. “The girls took control quickly, limited offensive mistakes, played great defense, and capitalized on almost every opportunity.”
Navarro Tournament
The JV Arabians competed in the Navarro tournament, wining in three matches; Canyon 25-19 and 25-14, Navarro 25-15 and 25-14, and Luling 25-9 and 25-21.
“We played good in the games we lost and didn’t play well in the games we won,” Coach Mangold said.
Offensively, Clarissa Zamora had 12 kills, Halle Hagdorn 6, Sydnie Harrell 8, Kelsie Archie 5, and Destiny Morales 1. With the assists were Zamora 11, Kaylee Howard 9, and Sara Moreno 4. They had 5 aces; Myla Miles 2, Moreno 2, and Harrell 1.
With the digs were Moreno 23, Miles 13, Archie 5, Zamora 8, Harrell 5, Howard 5, Morales 10, and Gabby Rodriguez 3.
“I was proud of how the players played because we were missing four players to other commitments,” Coach Mangold said. “They accepted the different positions and played with heart and hustle.”
By Abby Kohlleppel
Staff Writer