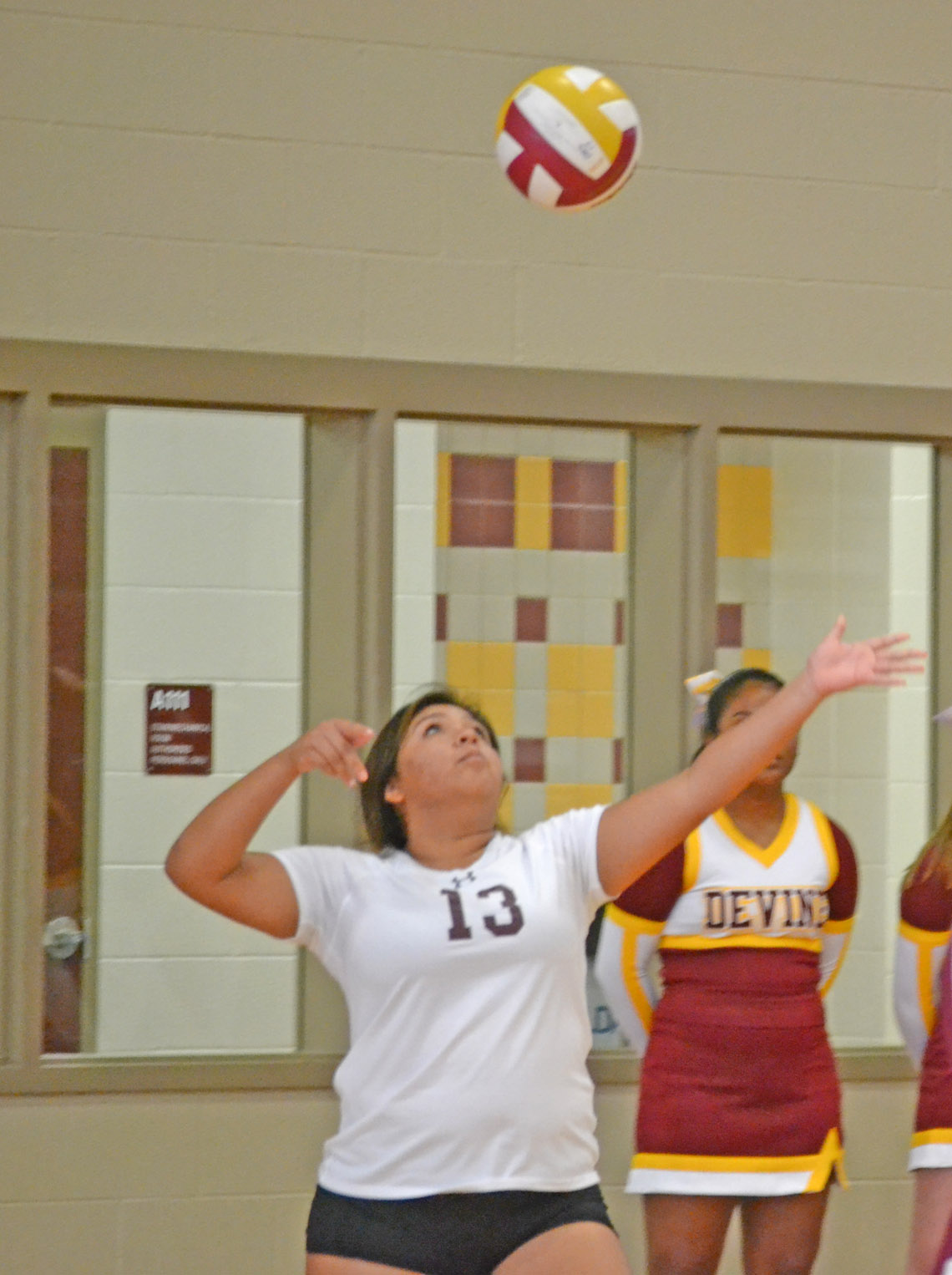 Devine vs. La Vernia
The JV Arabians played hard against LaVernia but came up short in three games; 23-25, 10-25, and 10-25.
“We played with a lot of emotion against the Lady Bears in set one,” Coach Mark Mangold said. “We made great plays and really limited our mistakes.”
Offensively they scored 15 kills; Clarissa Zamora 6, Makayla Waddey 4, Jasmine Pompa 2, Janaee Wofford, Kelsey Archie and Sydnie Harrell each with 1. Two players had an ace; Destiny Morales and Gabby Rodriguez both with one.
The team scored many digs off of La Vernia; Sara Moreno 14, Rodriguez 6, Wofford 4, Brooke Runyan 4, Morales 3, Kaylee Howard 2, Waddey 1, and Myla Miles 1. There was one block by Harrell.
“Our serve receive really crippled us in game 2 and 3,” Coach Mangold said. “But tonight I believe we learned.”
Devine vs. Holy Cross
The JV Arabians fought hard but came up short against Holy Cross. They lost the first game 18-25, won the second 25-20 and lost the third 15-13.
“We won 6 points in a row to get within 1 point with Holy Cross only 1 point from winning the game,” stated Coach Mangold.
Offensively they scored 15 kills, Zamora led with 7, while Waddey added 4, Harrell with 2 and Pompa and Runyun each with 1. There were also 6 aces made by Sara Moreno with 3, Runyun with 2 and Pompa with 1.
Defensively the Arabians had 13 assists made by Runyun with 8, Wofford with 4 and Moreno with 1. Adding blocks were Harrell and Pompa with 1 each. They also had 39 digs, led by Morano with 10 and assisted by Runyun with 7, Miles and Morales with 5 each, Wofford and Waddey with 4 each, Howard with 2 and Rodriguez and Archie with 1 each.
Tilden
The JV Arabians faced Tilden on Tuesday, September 12th in Devine.  They were able to beat them in two games, 25-9 and 25-14.
“This was a much needed victory for the very young Arabian JV volleyball team.  We dominated from the start, limited our mistakes and made smart plays while staying aggressive,” stated Coach Mark Mangold.
Offensively Clarissa Zamora led the way with 5 kills, followed by Makayla Waddey with 4, Halle Hagdorn with 3, and Jasmine Pompa and Janaee Wofford with 1 each.  In aces, Brooke Runyun and Sara Moreno had 4 while Myla Miles added 1.
Defensively the Arabians had 17 digs with Moreno, Wofford, and Waddey each having 4.  Destiny Morales added 2, and Runyun, Miles and Kaylee Howard with 1 each.  There were two blocks made during the game by Sydnie Harrell and Pompa.
The JV team stands at 6-10 overall and 0-0 in district.  They play Antonian there on press night.
By Abby Kohlleppel
Staff Writer
or