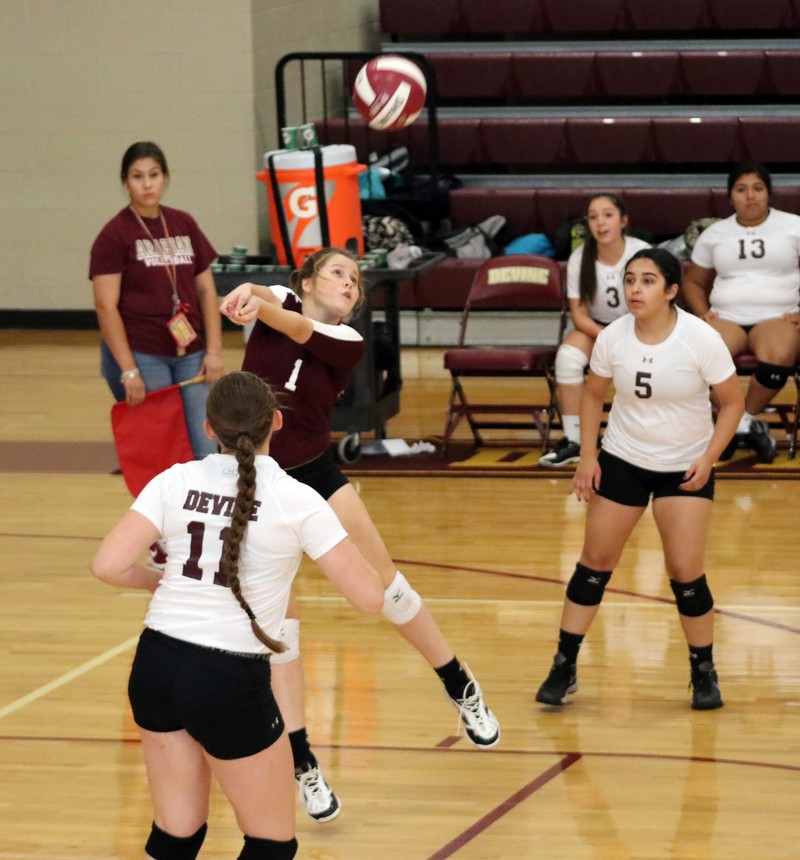 Winning big against Holy Cross and Crystal City, the JV Arabians have brought their season record to 118 and district to 6-1 with only last night’s game to add to it. Coach Megan Perez has led her team on an amazing season.
Holy Cross Knights fell hard to the JV Arabians on October 16th. Winning in two sets, the JV had a great night at the Dig Pink game with scores of 25-20 and 25-17. “This was an emotional game for us as we were playing for something much bigger than Arabian Volleyball due to the Dig Pink game. One of our players has first had dealt with the effects of breast cancer in her family and the girls wanted to show appreciation to her through their play. We want to thank everyone who game out to support the Dig Pink Foundation for Breast Cancer.” Coach Perez
Halle Hagdorn had 1 block. Alyson Taylor had 3 kills, Sydnie Harrell 5, Kennedy Duncan 3, Janae Wofford 3, Iselia Gutierrez 3, Hagdorn 1 kill. Allison Stevens had 3 aces, Wofford 2, Taylor 1, Brooke DuBose 4, and Destiny Moralez had 1 ace.
Crystal City was another great night for the JV Arabians with set scores of 25-12 and 25-15. “This was the most consistent volleyball we have played all year. From the serving, defense, offense, and the intensity, all levels of the game were played great! I am proud how well the girls are coming together at the end of the year and am excited for our last game against Pearsall!” Coach Perez.
Harrell had 7 kills, Duncan 2, Taylor 2, Wofford 2, Moralez 1 kill. Harrell had on block. Taylor had 4 aces, Wofford 3, Moralez 1, Mayla Miles 1, DuBose 4, and Heidi McLaughlin had 1 ace.
By Dicy Chambers
Sports Writer