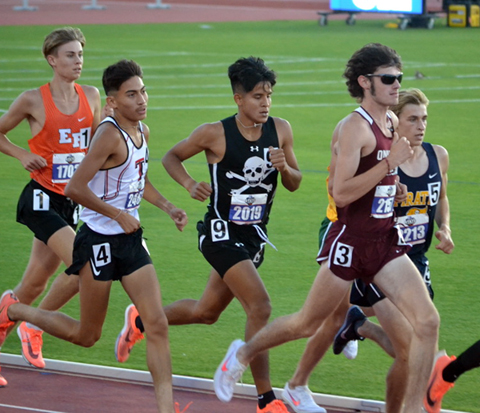 Lytle’s JoseCarlos Hernandez wrapped up his immensely successful high school track career with a personal best performance. Hernandez ran a 4:31.47 to place fifth overall in the 1600m Run on the campus of the University of Texas.
“After the race, when I went to go speak with him, JC was disappointed like most athletes who don’t get to get on the medal stand would feel,” said Head Coach Gilbert Ruiz. “I had to remind him of how PROUD I was of him and what he had accomplished while he was here.”
Hernandez completed his senior season as the District 27-3A runner up in the 3200m and 1600m run, Area runner up in 3200m, third in Area in 1600m, Regional runner-up in 1600m and third in 3200m, and his final fifth place performance at State.
Ruiz compared Hernandez’s outstanding Cross Country career to his final run at State by saying, “Just in this race alone, he was going against runners who had beat him rather handily during XC as the #1, 2, 3, 6, & 10 State XC finishers were in the field while he had finished 15th. Though I knew it would be difficult for him, he stayed with them, and for the first time he had negative splits on all his laps (1:11, 1:10, 1:07, and 1:02). They just had a little bit more of a gear on their last lap even though that was his fastest final lap ever in this race. I was proud of his efforts and how he competed in his final race as a LYTLE PIRATE!”
“He started his running career at Lytle in 2017 as a little 7th grader who finished 21st out of 53 runners at the district XC meet on a 4th place team,” Ruiz said looking back on Hernandez’s betterment since his middle school days. “Every year after that, he got better and better and finished as an All-Stater on a 4th place State team in XC and a 5th place State finish in the 1600m at Track.”
Congratulations JoseCarlos on an outstanding Pirate career!
By Jerel Beaty
Staff Writer