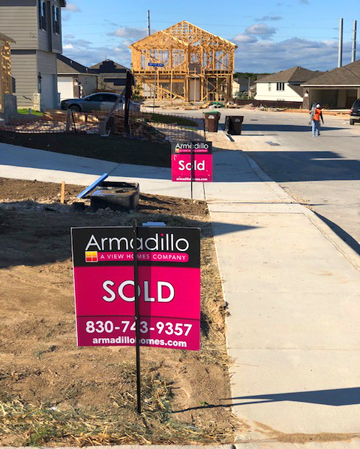 Rooftops sprouting along the U.S. 90 corridor are delivering more bumper crops of students into Medina County.
In the past three years, Medina Valley Independent School District (MVISD) has marched past Boerne, Cibolo/Schertz and other fast-growing districts to claim fourth place for new homes among the 21 school systems in the San Antonio area.
The MVISD attendance zone is logging 1,002 housing starts annually – nearly three a day, every day — according to newly published second-quarter statistics. And COVID-19 hasn’t slowed things any. Starts are actually up from last year’s pace.
While much of the residential growth remains in Bexar County’s far western enclaves, Medina County is increasingly getting its share.
Maps reviewed by the News show 4,540 home sites poised for construction in five new communities west of Highway 211, between Potranco Road and U.S. 90.
Though COVID has hampered sales of starter homes typically purchased by young service-sector workers hit hard by pandemic-related layoffs, overall demand remains strong.
“The lowest-cost homes are around $225,000. They can’t build them fast enough,” said Medina County Precinct 2 Commissioner Larry Sittre, noting that price points are pushing well past $400,000.
Since 2010, the school-age population in the MVISD area has climbed 32 percent to 8,135.
But it’s not just kids who are coming. Total population growth is up 38 percent to 30,164.
Attracting a mixture of young families and retirees, the region straddling the Medina-Bexar line is home to several subdivisions with big growth projections. The top 10 selling communities there logged 855 closings in the past 12 months, according to second-quarter numbers compiled by Templeton Demographics.
Luckey Ranch was the sales leader with 157 closings, followed by Falcon Landing (128) and Whisper Falls (126).
The Ladera community had 2,041 lots for future development, followed by Champions Park (1,244) and Hunters Ranch (1,039).
Templeton reported that those 10 communities have 6,073 lots available for future development, a 15 percent increase from the first quarter. All told, the area has 23,442 lots in inventory.
Growing pains
Many large-scale developers have stayed on the Bexar side of the county line for ready access to sewer connections, enabling them to build more homes per acre.
But pointing to Alsatian Oaks just east of the Castroville Walmart, Medina County Realtor Shannon Beasley said it’s only a matter of time until more builders head farther west.
“Taxes are lower than in San Antonio,” said Beasley, who is also a MVISD board member.
In fact, Sittre said Medina County’s taxes are appreciably less than any neighboring county.
Sittre has been a strong proponent of Tax Increment Reinvestment Zones (TIRZ) in fast-growing sections of eastern Medina County. A TIRZ is an economic development tool that retains a majority of increased tax revenue within a defined area until a developer makes their money back (recoups their investment).
In addition, the county has approved several Public Improvements Districts (PIDs) to raise funds in the area.
A PID is an economic development tool that uses funds for public improvements and infrastructure that benefit the district.

PID assessments range from $0.18 to $0.50 to per $100 of assessed valuation- roughly doubling the local tax load in some areas. That PID assessment is on top of the county’s $0.5473 rate, set for approval this week
Sittre says PIDs cover infrastructure projects that would otherwise eat into the county budget. “If people don’t like them, they can go on down the road,” he said.
As for new growth paying its way, Sittre estimates that the residential development in Precinct 2 alone accounts for up to one-third of the county’s budget revenue.
Nevertheless, MVISD had to go to voters last year to approve a record $107 million bond for school construction. The package funded two 800-seat elementary schools along with renovations and an 800-student addition at Medina Valley High School.
But with enrollment outstripping projections, the district will likely have to float still more debt before its 2019 bond funds are even expended. All this triggers higher taxes for schools, which account for roughly 60 percent of typical property tax bills.
“Financially, we have been able to keep up with the student enrollment growth due to a steady rise in property values, mainly from new construction,” MVISD Superintendent Kenneth Rohrbach told the News.
“With current growth rates, a second high school needs to open in six years, which will require the district to hold a bond election in the next three years or so in order to have that building complete when it is needed. Most likely, a third middle school and additional elementary schools will be needed in that bond as well,” Rohrbach said.
Riding steadily higher appraisals that generate more revenue, MVISD lowered its tax rate 7 cents this year. The total tax rate for 2016-17, 2017-18 and 2018-19 was $1.4392. In 2019-20 it dropped to $1.4250. For this year it dropped again to $1.35419, Rohrbach said.
Medina County hopes to lure new businesses to serve all the newcomers. Expansion of commercial activity generates sales taxes and other revenue that help balance the costs that residential growth imposes on local services.
Beasley said her office gets “a ton of Houston calls” from home shoppers. Despite lingering concern about COVID-19, or perhaps because of it, she said housing demand in the area remains strong.
The strong sales activity in the eastern areas is rippling beyond tract homes. According to county figures through Sept. 16, septic tank connections in 2020 have nearly exceeded last year’s total.
With a relatively low two-month inventory of homes on the market, Beasley said houses are selling at 98 percent of listing prices.
“People are scooping up vacation property. They want weekend houses, farm and ranch property, places where they can get some space,” she said.
“When they’re heading west on 90 and see Haby’s Bakery, their brains go into vacation mode,” Beasley chuckled.
South on I-35
Heading south on I-35 can have a similar effect, and the city of Lytle could find itself on the cusp of its own development boom before long.
Lytle Alderman Ruben Gonzalez cites an Environics Analytics study showing that 864,000 people live within a 30-minute drive of the city.
“It’s the fastest corridor into [and out of] San Antonio,” Gonzalez says. “And people come here to shop because they feel it’s safer, friendlier and more convenient.”
City Administrator Josie Campa told the News that just six new homes were built in the city limits during 2019, and seven so far this year. Housing starts ranked Lytle 20th out of 21 San Antonio area school districts, according to Templeton.
But change is coming with a series of large subdivisions planned just east of I-35: the 69-lot Saddle Ridge development behind the Best Western Plus and Suites, and two others on nearby FM2790.
A mile from I-35 along FM3175, The Granberg has 135 home sites in Atascosa County. Located five minutes from Lytle’s HEB Plus, the community still has 100-plus lots for sale, reports Michelle Keith, office manager at Brush Country Real Estate.
Currently, 999 residential lots are platted for future development in the Lytle area, mostly in the unincorporated Atascosa County section of the city.
Noting that easy freeway access is a prime selling point for Lytle residents, Gonzalez added that the Texas Department of Transportation could help by extending freeway frontage roads to better connect the city with Natalia and Devine.
Bullish on the Lytle area’s prospects, Beasley said, “You can get more bang for your buck there.”
By Kenric Ward
Reporter