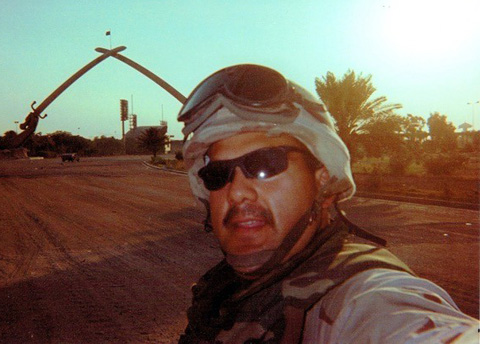 Nearly 150 kids walked across Warhorse Stadium last week, and graduation is a time of reflection and new beginnings. Hometown hero Miguel A. Avila, Jr. is a 1993 Devine HS graduate, now stationed at the Pentagon in Washington, D.C. He shares stories of several deployments to war zones overseas as well as his career now, where he serves as a Chief Warrant Officer 3 at the Pentagon–headquarters of the U.S. Department of Defense. 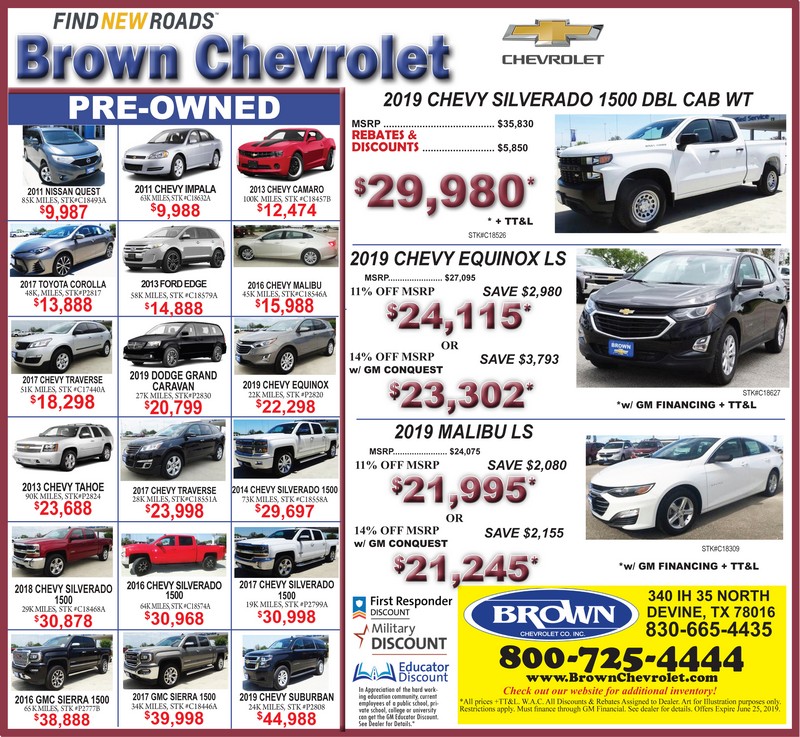 If you think it’s hot in Devine (and it sure is), then you can imagine what it must be like for soldiers like Avila who served in Iraq’s 130 degree temperatures where care packages with “Big Red is like gold.” He was right in the middle of many heartbreaking acts of war in which many of his fellow soldiers gave their lives, and shares his first-hand story.
In five deployments, Avila served in Iraq (Operation Iraqi Freedom), Afghanistan (Operation Enduring Freedom), Colombia-South America, Guatemala, and Kuwait/Qatar (Operation Noble Eagle) before entering the US Army Reserves and enjoying being back in the states at his current assignment.
He, and his fellow soldiers, will always have a great appreciation for the freedoms we enjoy in the US, after serving in countries “under Taliban rule,” where even something as simple as school books were prohibited, and sadly, he saw many soldiers who gave their lives to help deliver simple freedoms like these to civilians and children overseas.
“I have been deployed to several countries and have seen some unfortunate acts of war,” Avila said. “Thankfully, I never had to take anyone’s life and I hope I never have to. My experiences have given me an appreciation for life, even simple things like a toilet. When I was in Iraq, we had make-shift out houses. After a period of time, we had to burn our waste with diesel fuel. In Iraq, it can get pretty hot, like 130 Fahrenheit degrees hot. I remember hallucinating that day because it was so hot with all the gear we had wear.”
Over 7,000 miles away from his family and Texas, care packages filled with Big Red and Facetime with loved ones are two of the things that got him through wartime.
“Afghanistan was much different because it’s a mountainous region. The dirt and wind were always a bit too much, but you adjusted,” Avila said. “I remember receiving care packages from my family and friends with goodies from home. I treated Big Red like gold. I had facetime with my family, so seeing them from time to time, took the pain away of not seeing them in person for just a little while. All my missions were helping other soldiers and local country people in need. I made some really cool friends from other countries that spoke very little English. Culture, language, and food were all parts of my experiences that I will never forget.”
“I remember in Baghdad, Iraq, we would park our humvees in the streets and walk around the neighborhoods and local shops. We were frequently approached by children asking for candy. They would say “Mister, Mister” with their hand out expecting candy. Some would ask for money. There were lots of Iraq men who would make small talk with us. At times we would often visit small villages that were on the outskirts of Baghdad. The elders would sit us down and make tea for us, and feed us bread and rice. It was in their custom to feed their visitors and treat them well.”
Avila saw the devastation and sacrifices that so many soldiers made first-hand.
“On August 19, 2003 there was a horrific blast that shook the neighborhood we were visiting that day. It was the United Nations Building,” Avila remembers. “A suicide bomber drove a large truck packed with explosives through the barricade and detonated inside the compound. Twenty-two people were killed. My team and I were helping with the extraction of some of the bodies. We found one survivor with badly damaged legs. I would later learn he survived his wounds. You can read more about his incident at https://news.un.org/en/story/2018/08/1016462.”

“In Afghanistan, in the city of Qalat, I had to investigate a bombing that took place near an Army operating base. Three Soldiers were killed along with a Department of State Representative and her aide. Those Soldiers died protecting those who were delivering books to a deprived school….a school that, for many years, was not allowed to have books due to the Taliban rule…..They gave their lives for something good.”
“Most of the time I spent in Afghanistan was to help the local Afghanistan Army train their soldiers on the dangers of an insider who may pose a threat to their own forces. We shared tea and meals with them. It was a bonding experience. They all had their own personalities. I remember on one particular mission, we stopped at a local Afghanistan police base for a meeting with their Chief of Police.
“After the meeting we began leaving, and two police officers stopped my interpreter and asked them to ask me if I wanted some rice. I said “sure,” so one of them turned around and picked up this large tray of rice off the ground and offered me some. This tray of rice had been sitting outside in the sun, uncovered with flies and dirt all over it, but he offered me some. It would have been insulting had I turned it down, so I ate some dirt and all.”
Now, at the Pentagon, Avila has a dual job.
“I never would have thought I would join the military,” Avila said, but here he is at the Pentagon, nearly 20 years after joining the service in 2000…. I love the camaraderie with fellow soldiers that share a common goal. I love the experience of learning to work under pressure, problem solve, and serve others.”
“At the Pentagon, I work for the Army Deputy Chief of Staff as an Intelligence Officer,” Avila said. “The other job I have is working for the Under Secretary of Defense. My projects include writing policy changes to protect Department of Defense equities that will make a difference in our current military operations. I frequently go to meetings, write executive summaries for senior general officers, and brief senior executive staff members. Sounds boring, but coming from tactical and strategic deployments, it has been a learning experience like no other. Thank you Mrs. McAnelly and Ms. Hernandez who were my English teachers in high school. English writing has helped me in this particular job.”
Avila is happy to be back in the States with his beautiful wife Synthia Avila, and children Marsel and Marisque.
“One of many things I miss most about Devine is the simple life. Big time city life is busy, and often times I reflect what all I did there in Devine as a kid growing up. Ride my bike all through town without worrying about traffic. Shooting my BB gun in the backyard. Swimming at the public pool every summer and then grabbing a cold Big Red soda in the Golf Pro Shop next door. Cruising up the streets of Devine until 1am in the morning just because everyone else did, and then sitting at the car wash parking lot chatting it up with other friends. And of course who can’t forget Dairy Queen.” 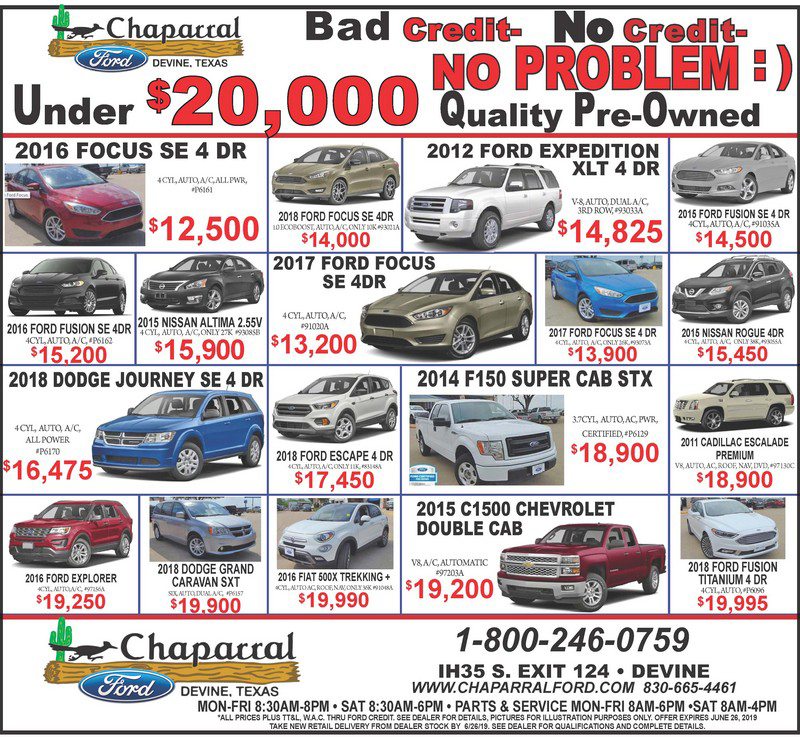