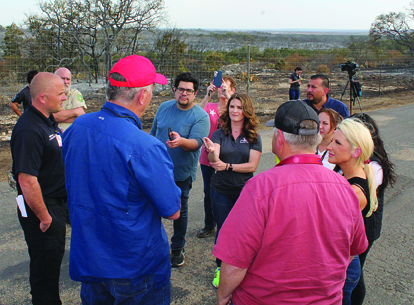 A spokesperson for the Texas Forest Service says that a lonely stretch of County Road 271 near Mico proved to be a critical fire break Saturday in the battle to contain the Das Goat wildfire that consumed more than 1,000 acres of Medina County.

James Wettstaed, public information officer for the Medina County fire, was on hand Monday when county officials led media photographers along the road still closed to the public.
“We were able to hold the fire at this road,” Wettstaed told the Devine News. “It gave us a secure line to operate on. You always have to start someplace safe where the fire is not going to get behind you.”
North of CR217, deep rugged canyons filled with cactus and mesquite are now covered in ashen gray. However, thanks to high winds blowing in the right direction the landscape immediately across the two-lane road remains unscarred by the wildfire that broke out Friday afternoon.
As of Monday evening officials classified the Das Goat wildfire as 95 percent contained.

For the next few days the work for firefighters along CR 271 and the entire scorched perimeter of the blaze will be searching for remaining embers close enough to untouched vegetation to potentially rekindle, Wettstaed said.
“We usually keep a close watch at least 300 feet deep along the edge following a fire,” he said.
Medina County Emergency Service District 1 Fire Chief Clint Cooke said until the fire was declared 100 percent contained the chance of rekindling remains possible.
Also on hand for the media event were Medina County Judge Chris Schuchart and Medina County Emergency Coordinator Keith Lutz.
As for Wettstaed, the biggest mystery left to be answered about Das Goat is who picked that unusual name.
“The first fire crew that arrived here was a Texas A&M Forest Service crew from Fredericksburg,” he said. “They had a list of names they wanted to use on fires and Das Goat was next on their list, owing to the German heritage in the Fredericksburg area.”