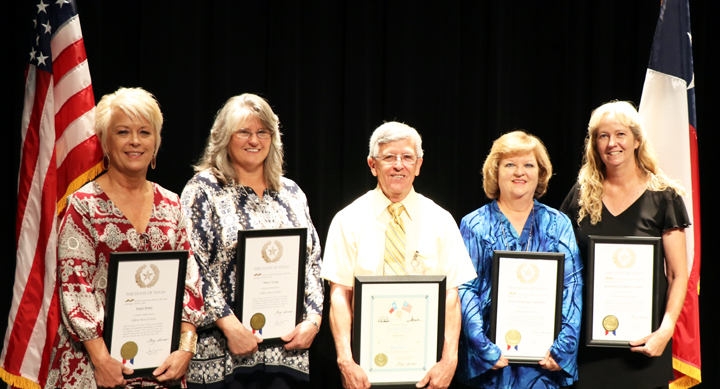 Heroes & Heritage (H&H) returned to Devine, Texas, this Thursday, September 5, 2019, with members of the United States Coast Guard. The program honred six educators and two community members with awards from the Governor of Texas. Fernando Rey and Mary Alamar Young (a DHS grad) presented the awards.
The H&H mission is to promote higher education for youth, develop strategic outreach to underserved communities, and conduct community outreach programs that address the issue of equality of opportunity.
The 2019 Student Educational and Leadership Program was held at the Devine High School.
H&H is proud to announce that awards from the Governor of Texas will be presented to six educators from the Devine Independent School District and two community leaders from Devine.
This is Heroes & Heritage’s second Student Educational and Leadership Program at the Devine High School First one was in 2017 when they honored Linda McAnelly and Dora Fernandez.
The following teachers and community leaders were awarded special recognition from the Office of Texas Governor Greg Abbott during the student program:
Devine High School:
Mary Long – The Yellow Rose of Texas Award
Debi Petty – The Yellow Rose of Texas Award
Roland Cadena – The Admiral of the Texas Navy Certificate
Devine Middle School:
Shana Beaty – The Yellow Rose of Texas Award
Nancy Haass – The Yellow Rose of Texas Award
Bill Lorraine – The Admiral of the Texas Navy Certificate
Community:
Kathleen DuBose Calame- The Yellow Rose of Texas Award
NancyEhlinger Saathoff- The Yellow Rose of Texas Award
Thank you HEB
The communities of Devine, Natalia and Castroville would like to say “Thank you to HEB for supporting the Heroes & Heritage Student Leadership and Educational Development programs.”  These communities are committed to patriotism, supporting their youth, and encouraging them to seek career opportunities that are possible  through higher education. Heroes and Heritage promotes “possibilities” by highlighting various occupations in government (military and civilian), including internship programs, and the skills and requirements necessary to become successful candidates and employees. Heroes & Heritage stresses the importance of making good individual choices and having self-determination. The student events are planned to stimulate interest and excitement. This is an important part of what Heroes & Heritage brings to our youth—inspiration, hope, and advice on how to move forward.  That is what Heroes & Heritage brings to our schools and our community. We know that HEB shares these values.

2019 Award Recipients
Devine High School Educators:
Mary Long is a teacher of Biology and Anatomy at the Devine High School where she has spent the last 28 years teaching and coaching. Mary received a Bachelor of Science degree at the University of Texas at San Antonio in 1988. During her 30-year career in public education, many of her former students have entered into health careers. Her sports and U.I.L teams have received many district and regional awards. For the past 19 years, Mary has held the title of Science Curriculum Coordinator for many of those years. In that role, she helped the district to vertically align and design curriculum in an effort to improve rigor and better prepare students for their next undertaking. Currently, Mary is focused on helping her students explore careers in medicine, improve college entrance exam scores, and earn college credit in Biology through the College Board Advanced Placement testing and College Level Exam Placement testing.
Debi Petty began working at the Devine HS in 2000 teaching business class and sponsored Business Professionals of America. She currently teaches all journalism classes (yearbook, newspaper, broadcast and photography) and she has been a UIL journalism coach since 2003 (many district journalism championships, regional qualifiers, state qualifiers and a State Champion in Editorial Writing). She is the Career and Technical Education Coordinator. She is the National Honor Society sponsor, lead class sponsor and cheerleading sponsor. Debi graduated from Southwest Texas State University in 1982 with a Bachelor of Science in Education – major journalism and minor in business.
Roland Cadena has been an educator for 45 years. He is the Devine HS Counselor (National Blue Ribbon School 2009-2010). Previously he was the Devine HS assistant principal. Some of his assignments from 1974 to 2004, in San Antonio, Texas, included: Assistant Principal at George Gervin Academy and at Holy Cross High School. He served as Principal at Terrell Wells Middle School and at the E H Gilbert Elementary School. His first teaching assignment in 1974 was at McCollum High School. He is a graduate of Our Lady of the Lake University with a Master of Education (Psychology and Counseling) and Bachelor of Arts (History major and Political Science minor). Throughout his distinguished career, he was received numerous awards.

Devine Middle School Educators:
Coach Shana Beaty was a standout volleyball player at Devine HS (State Champions in 87 and 88). She graduated from Schreiner University in 1992 with a BA in Exercise Science with a minor in English. Her first job was teaching Physical Education and ELA at the Devine Middle School. After spending two years teaching in Las Vegas, Nevada, she returned to her hometown. Today Coach Beaty continues to teach physical education as well as health at Devine Middle School. Her classes are fun and interesting. She is a teacher that goes above and beyond to help her students. Coach Beaty is a favorite among the students.
Nancy Haass has been an educator for 18 years. Upon graduation from Castroville, Texas, she attended the University of Texas at San Antonio and graduated in 1990 with a degree in Elementary Education math 1-8. Her first job was teaching at Ciavarra Elementary in Devine. Between 1992 and 2004, Nancy stayed home with her children. In 2004 she was hired as a long-term sub at the Devine Intermediate School. In 2006 Nancy began teaching math at Devine Middle School. She holds a Masters in Curriculum (2008) and acquired her certification for principal in 2018. Nancy has been the Devine Middle School’s department head since 2008. She is responsible for helping the students improve their math scores. Her students consistently score high on the state STARR test. She has participated in the Texas Regional Collaborative for Region 20. She has dedicated her teaching life to helping students navigate through a difficult subject and time in their life. Nancy works closely with the math department teachers to ensure they are giving students the tools needed for success especially in their math classes.
Bill Lorraine grew up in Milnook, Illinois. After graduating from high school, he moved to Natalia, Texas. He attended San Antonio College (1967-1969) followed by Southwest Texas State University (1969-1971). He has a Bachelor of Science degree in biology in 1971 and obtained his teaching certification in 1972. His career began teaching science at the San Antonio ISD in middle school. In 1974, he received his Masters of Education. Bill taught science in Jourdanton. Lucky for Devine, Bill was hired in 1984 to teach biology. His “egg drop” lesson has been a student favorite. In 1999, he became the assistant principal in Devine. From 2001 to 2005, he was the Poteet High School principal. He retired in 2005 but retirement did not last long. In 2006 he became the 8th grade science teacher at Devine Middle School. He makes science fun and interesting for the students. For example, he uses Rap to teach content and the students have a tendency to remember the lesson learned. He continues to be a favorite teacher. At the end of this school year, Bill Lorraine will complete 45 years in education.

COMMUNITY AWARDS
Kathleen DuBose Calame graduated from Devine High School in 1984. She is the Publisher of The Devine News since 1999. The Devine News was started in 1987 by her great-grandfather followed by her grandparents and parents. Her great grandfather traded his brand-new horse and buggy for the newspaper which was only 6 months old in 1987. It has been in the family for 122 years and is the oldest business in Devine. Kathleen proudly carries on the tradition of fair and accurate news in support of the communities of Devine, Natalia, Bigfoot, Moore and Lytle. She started working by her parents’ side when she 10 in 4th Grade and she has done every job in the business from scraping the wax paper off the floors, photography, delivering newspapers, typesetting, layout, reporting, editing, accounting and the list goes on and on. She has a tremendous reputation and respect for her honesty and compassion and doing everything she can for her customers. Kathleen serves on the American Cancer Society Relay for Life Publicity Committee of Medina County since 2000. She is very patriotic. Her father, grandfather, brother, uncles, and cousin served in the Navy. Her son, uncle, nephews and nieces served in the Army and her cousin served in the Marines. Her father in law in the Air Force.
Nancy Saathoff is also a graduate of Devine High School. Nancy has a Bachelor and Master Degrees in Elementary Education from Southwest Texas State University. She is a former elementary and teacher and UIL coach. She taught for 9 years, 8 in Texas and 1 in Oklahoma while her husband was in military pilot training. She took a break from teaching to a stay-at-home mother of five children. During that time, she began her many years of community service as the UIL Coach of Oral Reading, Spelling, and Creative Writing. She volunteered at the Devine ISD schools in a number of capacities including: the founding member of Devine Parent-Teacher organization in 1988 where she served as President and parent-leader for many years. She was an active member in the Devine Athletic and Band Boosters. She is a lifetime member of the VFW Auxiliary, VFW Post 3966, and active in promoting patriotism and citizenship in youth and teachers. Since 1994 to the present, she has been very active with the Boy Scout & Cub Scouts and she served as Troop Leader for the Girl Scouts for 10 years. Nancy is on the board of directors and currently serving as President of the Devine Ex-Students/Teachers Association.