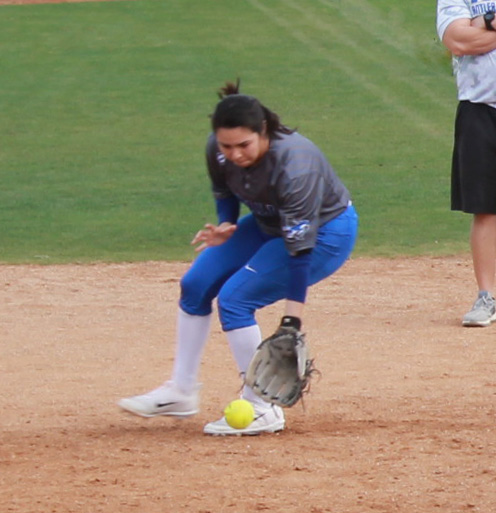 Natalia Lady Mustang junior pitcher Daniella Garza came out focused and determined Tuesday night vs. previously state ranked Karnes City. The small but mighty pitcher for the girls in blue controlled the tempo from start to finish as she allowed only four runners to reach base during the game, striking out 13 Lady Badgers.
Although Natalia’s offense had seen better nights, they produced enough to do their part, as four hits led the girls in blue with a shut-out victory over the orange and black.
“Daniella had a great night vs. KC with 13 big Ks,” Coach Travis Crowley said. “Karnes City is a really good team and she kept them off balance all night long.”
In their opening at bat, three of four Lady Badgers were sat down via strike-outs as they accounted for one of two hits in the game in the 1st.
Natalia was able to strike in their first at bat. After watching their lead-off strike-out, Natalia used a JuJu Morales single, a base on balls by Garza followed by a Bryanna Perez single and a passed ball to take a 2-0 lead.
The Lady Mustangs added their final run of the game in the bottom of the 3rd inning. With two outs, Biviana Figueroa got things started with a double to the fence. A pinch runner was put in and scored thanks to a single by Garza giving Natalia a 3-0 lead.
The girls in blue led by Garza did their part defensively to defend their lead en route to a 3-0 home victory.
Natalia finished the game with a 4-2 offensive advantage as the Natalia defense did surrender two errors compared to 0 by the visiting Lady Badgers.
At bat- Trista Vera 0-3, Morales 1-3-1run scored, B. Figueroa 1-3, Megan Castro 0-0-1run scored, Garza 1-2-1run scored-1RBI, Perez 1-3-1RBI, Felicia Guzman 0-2, Jimena Figueroa 0-2, Gabby Contreras 0-2 and Gabi Sontoya 0-2.
By Eric Smith