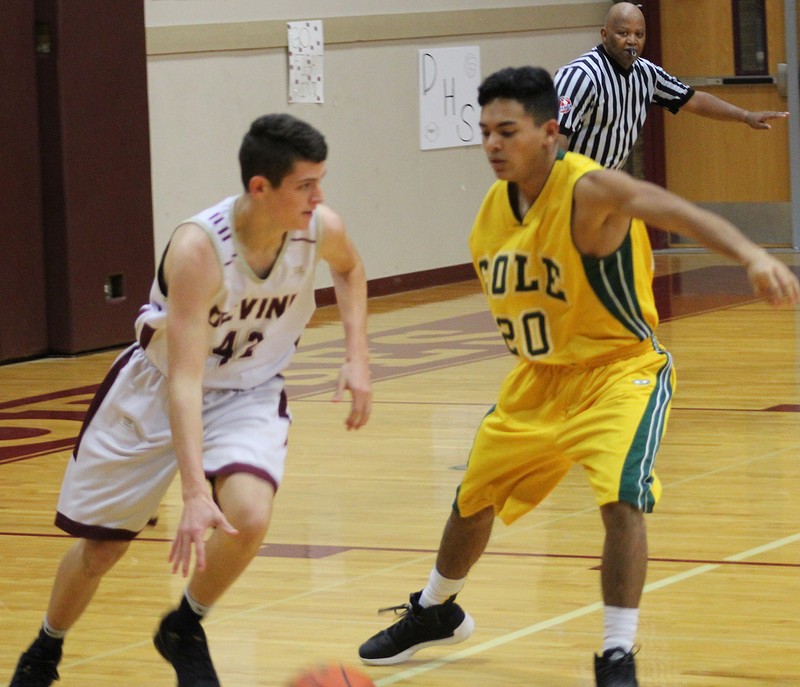 The Freshman Warhorses hosted the SA Cole Cougars in their very first high school basketball game. Full of anticipation and jitters, the young Warhorses took the court and played hard. Brian Schaefer sank two three pointers early in the first quarter to dispel some of the nerves. Their high energy led to a 40-30 vicroty for the Warhorses.
“I am proud with how we competed and got after it. Brian Schaefer led the way with 15 points nailing two big three pointers in the 1st quarter to help get rid of the first high school game jitters. Robbie Elizondo was a good floor general, and scored 5 points. Sage Cruz was a huge defensive spark plug off the bench adding 6 points. I know it’s really early, but this team has all the pieces to be special, if we work hard and compete on a daily basis,” said Coach Quenton Sanders.
R. Elizondo scored 5 points, S. Cruz 6, B. Schaefer 15, C. Ortiz 2, C. Trammell 4, X. Contreras 2, P. Carr 4, and C. Gutierrez 2 points. Also making the freshman team are M. Espinoza, B. Winkler, Z. Rico, C. Waddey, J. Solis, H. DuBose, and G. Hewtty.
The Freshman Warhorses will host a tournament this weekend with games on Thursday and Saturday. Marion, McMullen, Pleasanton, and Gonzales will participate. Thursday’s games will be Marion/Devine 9:30, Gonzales/Pleasanton 10:45, McMullen /Marion 12:00, Devine/Gonzales 1:15, and Pleasanton/McMullen 2:30. Saturday Pleasanton/Devine 8:45, Gonzales/Marion 10:00, Devine/McMullen 11:15, Marion/Pleasanton 12:30, and McMullen/Gonzales 1:45. Games may start earlier if possible and will be played in the high school gym.
December 7-8 the freshman will head to Pleasanton for a tournament, Navarro on December 11th, and then the Freshman Warhorses will host a second home tournament with Cotulla, Dilley, McMullen, and Pearsall on December 13th and 15th.
By Dicy Chambers
Sports Writer