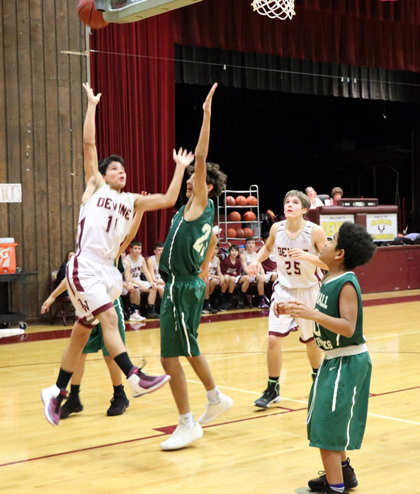 Crystal City
Facing Crystal City for the second time in district, the Freshman Warhorses were out to win this time. The Warhorses found the “sense of urgency that has been missing for a long time,” said Coach Quenton Sanders. They were aggressive and determined to get this win.
At the end of the first quarter, the Warhorses led 14-7 and they remained ahead until the half ended with a 24-19 lead. The half time break let the Warhorses catch their breath and they were able to out shoot Crystal City 17-2. Their fourth quarter was slow offensively but they were able to hold Crystal City from gaining the lead. The Warhorses won 42-31.
Cody Trammel led with 8 points, assisted by Brian Schaefer and Peyton Carr with 7 each, Chris Ortiz, Zach Rico, Hayden Dubose, and Gabriel Hewtty with 5 each.
Pearsall
Pearsall started off strong against the Freshman Warhorses but they could not hold Devine’s aggressive offense from finding the basket again and again. The Mavericks led 6-5 at the end of the first but that lead was quickly taken from them in the second quarter. The Warhorses ended the half 18-14 and had to fight to keep that lead in the third quarter. Pearsall kept the score close but were not able to take the lead back. Devine finished this game strong in the fourth out shooting Pearsall 20-12 and won the game 43-33.
”With the win Friday night we have secured a winning season, which has been our main goal all year. We still have a lot of work to do with a tough road game Friday at Hondo, and then finishing up at home versus Carrizo Springs. We are up to the challenge. Our record is 14-10,” stated Coach Quenton Sanders.
By Dicy Chambers
Sports Writer