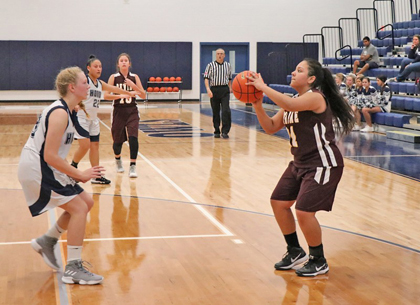 The Freshman Arabians added another win to their already impressive season. The Freshmen worked hard in their final home game of the season against Crystal City and won 44-11. This win brought their season record to 19-0 and 7-0 in district.
“We pushed the tempo in the first half in an attempt to set an early tone. Expecting Crystal City to respond with a run of their own, the Arabian basketball team prepared to play their trademark hostile defense.
“Kaydi Yeats knocked down a 3 and followed with a 12 foot jumper for the first 5 points of the game. We made great passes setting up our posts for easy baskets. The Arabians controlled the paint, and the boards grabbing offensive and defensive rebounds. Yessika Garza left defenders in the dust as she drove baseline Kendall Marek, Mayah Brogden, Cecilia Martinez and Marianna Hutton like always create problems under the basket for the opposing team. Lacy Shook again was fantastic, she is a problem for other teams and no one has found a solution. This was another great game and one more step towards a perfect season,” said Coach Mark Mangold.
Yesika Garza scored 13 points, Kendall Marek 10, Kaydi Yeats 6, Cecelia Martinez 5, Marianna Hutton 4, Lacey Shook 4 and led the team in assists, and Mayah Brogden 2.
By Dicy Chambers
Sports Writer