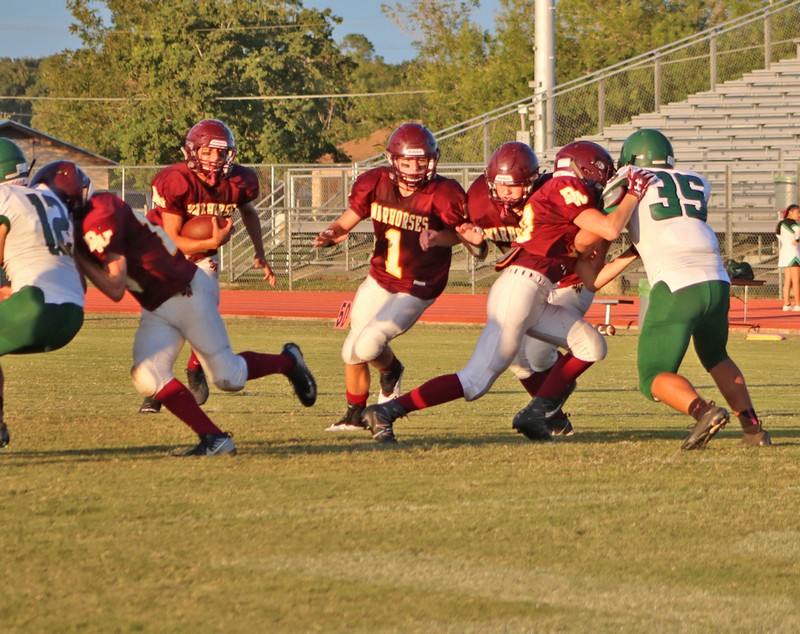 Click here for photos of the Warhorses vs Pearsall!

Devine freshman quarterback Brady Hackebeil probably did not have to ice his throwing arm after the Warhorses decisive 46-20 win over the Pearsall Mavericks last Thursday at Warhorse Stadium. Although he only threw one pass the entire game, Hackebeil ran for three touchdowns while teammates Xavier Contreras rushed for two and Zachary Rico added another.
This game was never in doubt as the Horses held a 16-0 advantage after the first quarter of play. Hackebeil’s 8-yard run and Xavier Contreras’ two-point conversion gave Devine an 8-0 lead. Minutes later, Hackebeil’s 85-yard run and Zach Nowicki’s two-point attempt bumped the lead to 16 points.
Contreras hit pay-dirt twice in the second quarter, once from 4 yards out and another from 20 yards. He and Nowicki tacked on the conversions to increase Devine’s lead to 32-0 going into halftime. Hackebeil intercepted a Pearsall pass to set up the initial touchdown by Contreras.
Pearsall managed to get the goose egg off the board in the third quarter but Devine’s Hackebeil returned the favor by scoring on a 36-yard run after a Peyton Carr interception. The Warhorse lead was 40-8 going into the final quarter.
Cody Trammell scored the final touchdown of the night on a 1-yard run with Zachary Rico finishing the 46-point blitz on the two-point conversion.
Devine evened their overall record at 4-4 and picked up their first district win in the process. The Warhorses are 1-2 in district contests.
O-Line dominance
Punting was never an option as the Warhorses racked up first down after first down, touchdown after touchdown. The offensive linemen put forth an outstanding effort in creating holes for Hackebeil, Contreras, Nowicki, and Carr to gain a ton of yardage. Left guard Joey Blanquiz, left tackle Jeffrey Seal, center Kannon Ramirez, right guard Robert Ramirez, and right tackles Austin Reyes and Gabriel Hewtty deserve much of the credit for the 46 points on the board at the end of the ballgame.
Up next
Devine takes on the Poteet Aggies at Warhorse Stadium next Thursday in their final home game of the season. Kickoff is set for 6:00pm.
By Jerel Beaty
Staff Writer