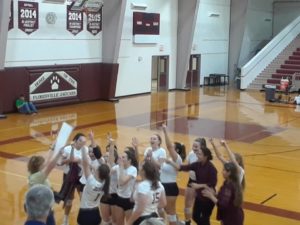 It was a great night of volleyball Tuesday night when the Arabians beat Cuero in three sets to become the Bi-District champions for the 3rd year in a row! With set scores of 25-21, 25-23, and 25-19, the Arabians had to fight hard for their win.

“I thought the girls did a great job of fighting tonight. There were times where we kinda lost focus and let Cuero come back into the games. But the girls regained focus and composure and took control of each set in the end,” said Coach Leigh Anne McIver. The Arabians came from behind to win the second set.

Senior Sara Moreno scored the only ace of the night and had 1 assist and 8 digs. Senior Sierra Pompa finished sets 1 and 2 off with a kill, she had 20 kills, 3 blocks, and 17 digs. Freshman Macey Hein had 26 assists as setter, 4 kills, and 8 digs. Senior Dana Aaron had 1 kill, 1 block, and 5 digs. Senior Alissa Stehle had 10 kills, 3 assists, and 13 digs. Junior Kaylee Howard had 3 digs. Junior Gabby Rodriguez controlled the backcourt with 20 digs. Sophomore Megan Runyan had 3 kills, 1 block, and 2 digs. Sophomore Madison Pike had 3 blocks, 2 digs, and 1 assist. Juniors Jasmine Pompa, Clarissa Zamora, Myla Miles, and Sydnie Harrell supported their team from the sideline.

The Arabians will play Thursday November 1st in Beeville against Orange Grove at 6:30pm. Orange Grove took third place in District 31 and beat Hidalgo 3-1. Hidalgo was Runner Up District Champs in District 32. The winner of the Devine and Orange Grove game will face either La Vernia (District 30 Champions) or Rockport (District 29 Runner Ups) in the Regional Quarterfinal game.

25 to 23 Devine takes 2nd game too but not without a fight from Cuero with an early lead. Sara serve& Pompa spike tops game2 @devnewssports pic.twitter.com/UuB4aySG3j