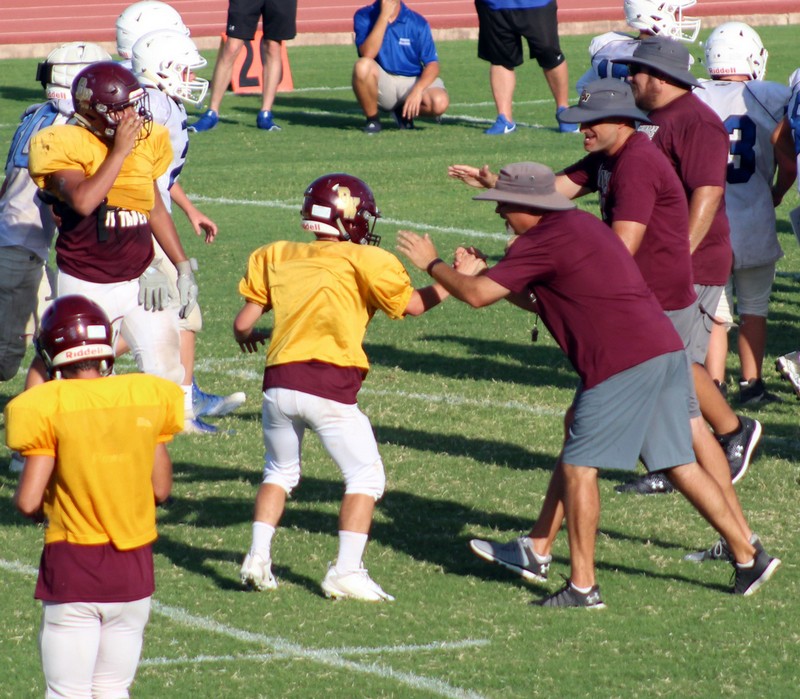 Behind solid blocking from the offensive line, quarterback Brady Hackebeil rushed for two touchdowns to give the Devine Warhorses a 2-0 win over the visiting Bandera Bulldogs last Friday night. The freshmen have one more scrimmage against Navarro Thursday evening in Navarro at 5:00pm.
Several running backs carried the ball for positive yardage on the night. Xavier Contreras, Sage Cruz, Jared Fernandez, and Gus Puente carried most of the load.
“The boys played hard and did a good job of executing certain plays,” stated Coach Bart Oropeza. “We still have a lot of work ahead of us in order to get to where we want to be. This is a great group of boys to work with. They show up to practice ready to put in the work. We will continue to work hard every week in order to improve.”
The extra scrimmage that the team has will help settle nerves as the real games approach. “We were a bit wide eyed at the beginning, but soon settled in and started to play some physical football,” according to Coach Juan Gonzalez. “I think the boys played very well for their first high school scrimmage. This group is an awesome group to coach. They are always ready to go during practice and are self-motivated to do extra everyday.”
Gabriel Hewtty and Kannon Ramirez blocked well and controlled the line of scrimmage. Ryan Castro, Terry Christanelli, and Chris Ortiz made several tackles. Linebackers Zack Rico, Zack Nowicki, and Hadyn Brumage lead the defense by calling the plays in the huddle. Free safety Brady Hackebeil and cornerbacksSage Cruz and Xavier Contreras contributed as well. Outlaw Walker and Mason Martinez are outside linebackers and they helped control any outside running or passing threats.
By Jerel Beaty
Staff Writer