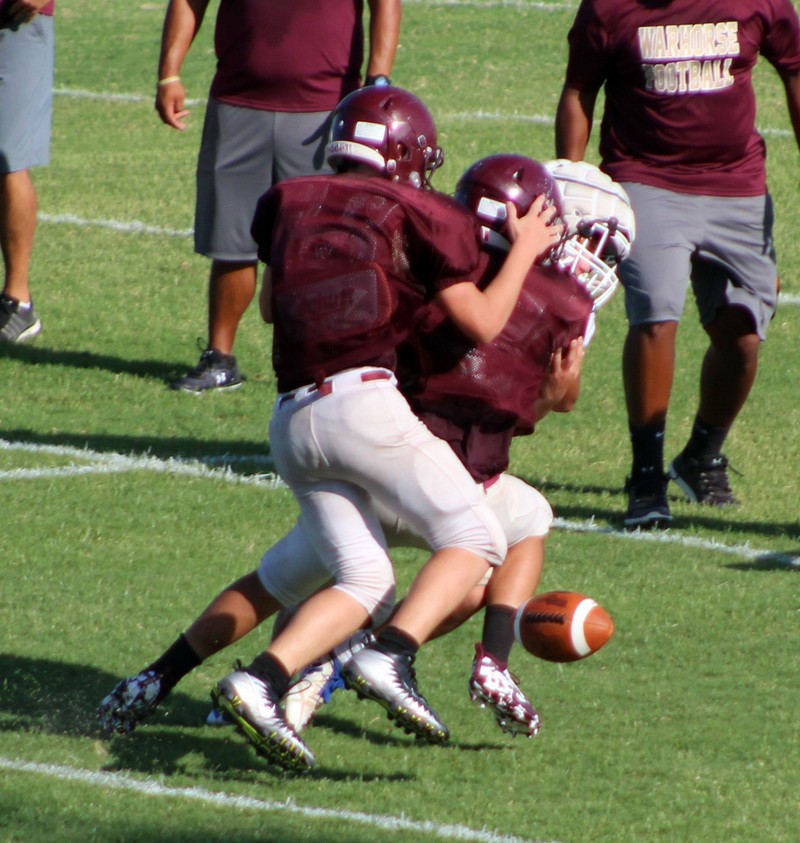 The JV defense were beasts in shutting out the Bandera Bulldogs two touchdowns to none last Friday at Warhorse Stadium. The defensive until flew to the football all night while the offense reached the end zone twice in the first scrimmage of the year for both teams.
“I thought we executed really well,” JV offensive coach Heath Poppe said, “We had some mistakes like aiming points,taking wrong steps, and backs sometimes having their heads down but I was very pleased with their effort.”
The offensive line group of Tristin Kannard, Darrin Lafferty, Jeoffery Seal, Robert Ramirez, Kaylob Nira, Jesus Hernandez, Christian Gerlach and Chris Wilcox blocked well up front. Mason Burford, Michael Polanco, Hunter Maxwell, Hunter Reyes, and Devin Ornelas found success running behind those great blocking efforts by the men down in the trenches.
Reyes scored the first touchdown on a 4th and 1 on the 13 yard-line. Ornelas scored on a 1 yard plunge later in the scrimmage. With another scrimmage and going into the regular season, the runner’s vision will improve just as the aiming points of the linemen will.
Up next
The JV travels to Navarro to scrimmage the Panthers Thursday evening at 6:00 pm.
By Jerel Beaty
Staff Writer