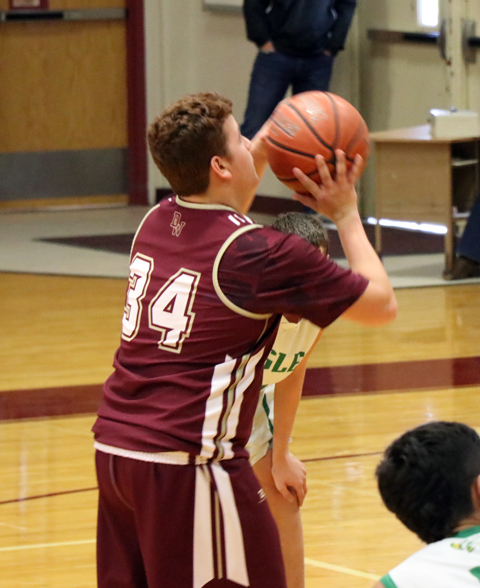 The Freshman Warhorses increased their winning record by two last week after beating Marion and Lytle. “The first games after a long layoff always worry me as a coach because of the limited gym time. The way the young men played I could not be more proud. Their energy and effort for both road wins was through the roof. All we demand as coaches is effort, and this team continues to answer the bell in that regard. Everyone on the team is making key contributions. That makes us a very hard team to beat. This week will be one of our toughest of the year as we host Fredericksburg and Crystal City to open district play. We are 14-4 on the year.” Coach Quenton Sanders
The Warhorses took the lead from Marion early in the first and never looked back. Leading 26-12 at the end of the first, they increased their lead to 40-23 at the half. In the second half, the Warhorses were outscored 13-19 in the third but they held on to their lead and came back in the fourth to win it 61-48.
Rylan Mata 2, Noah Macias 4, Cadence Hanson 18, Jaiden Burford 4, Juan Lopez 5, Juan Billalobos 2, Aiden Zapata 5, Jacob Antu 8, Kaiveri Alvarez 9, Joaquin Philippi 4. Q1 26-12, Q2 40-23, Q3 53-42, Q4 61-48. FTP 50%.
Lytle could not get the ball past the Warhorse defense on January 10th. Devine won 42-15 after an offensively aggressive game. Leading 21-4 at the half, the Freshman continued to press the Pirates and take advantage of their mistakes. Macias lead with 8 points in the third. The fourth quarter was the slowest for both teams with Devine outscoring Lytle 4-3.
Macias 4, Hanson 16, Lopez 2, Nick Ortiz 2, Zapata 2, Antu 2, Alvarez 4, Philippi 10. Q1 10-4, Q2 21-4, Q3 38-12, Q4 42-15.
By Dicy Chambers
Sports Writer