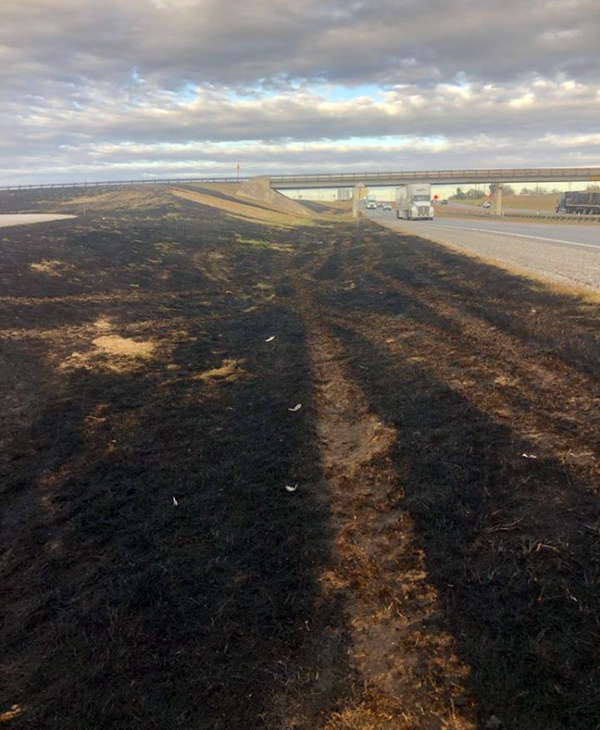 A string of 5 fires broke out on the side of I-35 just north of Devine, burning roughly 10 acres this past January 8th around 3 pm.

“The winds were real high, and that, along with the traffic made it really difficult,” said Devine VFD Deputy Chief Mike Walker. “The smoke was so thick you couldn’t see more than 20 feet in front of you. I had to leave the siren on just hoping other drivers could see where I was because the smoke was just so thick around that overpass.”
Two of the fires broke out by the I-35 overpass by the Chaparral Ford Dealership, and 2 broke out on both sides of the Chacon Creek crossing near Walmart, and yet another started right between the overpass and Chacon Creek area.
It was a scary and dangerous battle, and thankfully Lytle and Natalia VFDs came in to assist as well.
“I just couldn’t get the road shut down fast enough. We did have one collision at the foot of the overpass, which disabled one vehicle, but thankfully no one was badly injured or needed to be transferred,” Walker added. “With the smoke as thick as it was, I would have hoped drivers would pull over, but they just seemed to keep coming. It was a dangerous fire.”
As to what caused the fire, that is a mystery.
“It could have been caused by chains dragging on the road behind a truck or tire, we are not sure,” Walker said.
A special thanks to all of our volunteer firefighters who dedicate so much time and energy to keep our community safe.