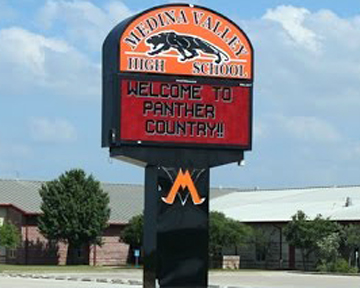 In our weekly COVID conference with county officials, they reported that 24 new cases have been reported since last Friday. One Medina County school district, MVISD, does have a handful of active cases amongst three campuses and central office.
Medina Valley High School first reported a confirmed COVID case in a student in a letter sent out to high school parents on September 1. MVISD now has 4 active cases in staff and students.
“The 5 active cases include 2 MVHS students, 1 Medina Valley MS staff, and 1 Central Office staff member, and 1 student at Luckey Ranch Elementary,” stated MVISD Superintendent Kenneth Rohrbach when we inquired this Tuesday. “Our Nurse Coordinator, Tina Schmelzer, and our District Safety Coordinator, Tanya Stivors, conduct the contact tracing for the District and have done an excellent job. We are notifying all staff and students on a particular campus or department if a positive case is confirmed on that campus or in that department. Also, sanitation of facilities occurs throughout the day, with dedicated housekeeping staff in place just for that.”
There are a total of 37 active cases in Medina County at this time, bringing the total case count to 1,020 cases in county residents, and the lag time in reporting seems to be improving. Officials are hoping that we do not see another spike after the Labor Day holiday as we did with 4th of July.
“We do have some active cases in local schools. We are working closely with schools when we have an active case, but I am not going to keep up with posting numbers for COVID cases in area schools (in county charts). I am going to let the schools do that. I know Medina Valley ISD sent out letters last week,” said Patricia Mechler, Medina County Health Unit Director. “I know some of these cases at MVISD are staff who reside in Bexar County, so that makes it more complicated. We did also have some other cases in students/staff at local schools before school started.”

She stated that if we do have an outbreak at any school or campus in particular, the Health Dept. would start reporting.
The letter that was sent out to MVHS parents Sept. 1 stated, “The student was present on campus on August 31” and that the local health department would be conducting an investigation and would be in contact with any individuals who are determined to be in close contact with that student. no longer than the following day, Sept 2nd. “Those that were in close contact will remain off campus for up to 14 days to ensure they do not have the virus, so that there will be no further spread,” the letter stated.
On September 4th another letter was sent out notifying that a staff member who was lab-confirmed to have COVID-19 was present on the campus of Medina Valley Middle School on Tuesday, September 1, 2020.
Devine ISD did have a handful of student athletes/staff that tested positive during summer sports camps, but it was before the school year began. Superintendent Todd Grandjean stated that Devine ISD does not have any lab-confirmed active cases as of this Tuesday, Sept 8. “From June 1 to August 20, we had 4 total student/staff lab confirmed positive cases,” Grandjean adds.
The cases at MVISD are the first active cases to be reported since in-person classes began.
Both Devine ISD and MVISD began in-person classes two weeks ago, while many other school districts such as Hondo ISD, Lytle ISD, and Natalia ISD are just beginning in-person classes this week.
In other COVID news, Mechler reported that the long term care facility hit hardest, Community Care, now has their own antigen testing system like some of the other care homes.
Judge Chris Schuhart added, “Things are changing. Let’s just hope they keep changing for the better.”