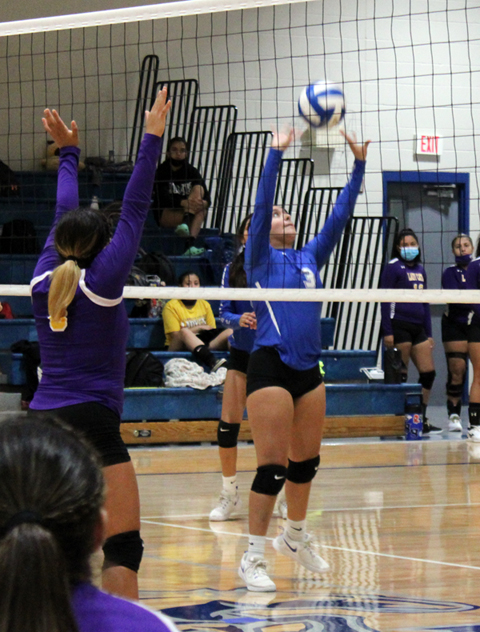 Facing the D’Hanis’ freshman team, the JV2 Lady Mustangs lost on Tuesday night in three sets. They dropped the first set 17-25 but took the second 25-23 in a tight back and forth game. In the third set both teams fought hard and D’Hanis won 15-11.
Aces: Miranda Martinez 2, Valerie Saenz 2. Kills: Angelina Duenes 1, Saenz 1. Digs: Ebonee Velasteuz 4, Dunes 3.
The JV2 took down the Carrizo Springs freshman in two sets at 25-16 and 25-20. No stats were provided. The Lady Mustangs will play Jourdanton this Saturday and Poth on Tuesday.
JV 1 Lady Mustangs
The JV1 Lady Mustangs fell to D’Hanis on September 1st and then beat Carrizo Springs Friday night in two sets. D’Hanis was a late addition to the schedule and the JV1 team worked hard to keep up with them. Falling 23-25, they beat D’Hanis in the second set 25-8 but then lost the final 11-15.
Kills: Briana Paredes 1, Dominique Banda 1. Assists: Isabella Martinez 4. Digs: Kody Blanquiz 5, Meg Martinez 3, Banda 3. Aces: Banda 4.
Friday night against Carrizo Springs, the JV1 Lady Mustangs dominated and won in two sets at 25-12 and 25-15. It was a great game to end their preseason and head into district on a win. They opened against Poteet last night and will face Jourdanton this Saturday.
Kills: Castro 2, Curiel 2. Aces: I. Martinez 3, Banda 3. Digs: Martinez 4. Blanquiz 4.
By Dicy Chambers
Sports Writer