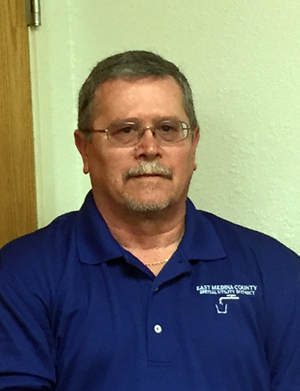 In these drought-ridden times, the East Medina County Special Utility District (EMCSUD) is working to ensure that water users won’t be left dry.
With 3,050 customers, and growing at the rate of about 100 a year, EMCSUD is one of the few area systems that own sufficient water rights to meet its full demand during the most stringent pumping reductions.
“The district has a drought contingency plan that includes specific actions aimed at reducing the use of water during each stage of critical period pumping reductions,” said EMCSUD Superintendent Bruce Alexander.
“We are confident that we will be able to maintain the appropriate level of service to our customers during all phases of critical period reductions.”
But Alexander isn’t content to merely meet minimal standards for today. EMCSUD is aggressively purchasing additional water sources to supplement supplies it receives from the Edwards Aquifer.
The district bought 118 acre-feet from the Verstuyft family in 2019 and has two purchases of 22.5 acre-feet each under contract from the Persyn family, Alexander told the News in an interview last week.
All of these purchases were for $5,000 per acre-foot. An acre-foot is 325,851 gallons, or enough to cover one acre to a depth of one foot.
The water rights, in the Edwards Aquifer Authority (EAA), were originally registered in Bexar County.
Alexander said about 10 percent of the total EAA water rights owned by the district originated as EAA unrestricted irrigation water rights from Bexar. The remainder of the EAA water rights owned by the district are either part of the EAA Initial Regular Permit issued to the District or were EAA unrestricted irrigation water rights registered in Medina County that were purchased by the district.
The district holds these water rights in reserve under the district irrigation permit until transferred into its municipal use permit as needed to meet demand, Alexander said.
Following a purchase, the district works with EAA to lease the water rights to EAA habitat conservation programs. The district currently has 300 acre-feet entered into the Voluntary Irrigation Suspension Program and 160 acre-feet banked in the Aquifer Storage and Recovery Program.

Each of these programs pays the district to hold the water in reserve until needed.
The district collects $1,833 from each new customer at the time service begins. Those funds are deposited in EMCSUD’s Water Acquisition Fund.
Among its recent improvements, the district began reading meters for every account in December 2019. Prior to that, customers were required to read their meters and determine the amount due based on usage according to a rate sheet provided by the district.
Alexander said EMCSUD completed a conversion to a radio-read meter system in November 2019. Customers are now mailed a monthly bill for water service.
EMCSUD, whose service area spans roughly 200 square miles, is now working on funding to support its 2020 Capital Improvement Plan (CIP), estimated to cost $19,893,860.
For starters, EMCSUD’s Board of Directors has authorized staff to seek up to $4 million in bond capacity to fund prioritized projects. By retiring existing bonds in 2021, the district expects no rate increases will be required.
Key projects include:
• Upgrades to each of the district’s water production facilities.
• Replacement and improvement of water mains on Hwy 90 east of Dunlay and CR 6710 between CR 5710 and FM 471. Both lines have experienced a significant number of leaks.
• Improvements to the distribution system to enhance operational efficiency of the district’s three separate but interconnected water systems.
Alexander said the average customer uses 6,500 gallons per month, but volumes vary widely.
EMCSUD’s largest commercial customer, when it was operating, was NaturalShrimp Inc., near La Coste. The aqua-farm was pumping 113,800 gallons per month, and it expects to need at least that much when its plant is rebuilt and back online.
The next biggest users are Southwest Gulf Railroad Co., and ADB Utility Contractors, at 61,600 gallons and 61,000 gallons respectively.
The district is currently working with the Texas Commission on Environmental Quality for financing and construction plans. The goal is to have funds in place by the end of 2020 and begin construction in mid-2021.
With EMCSUD topping 3,000 customers for the first time in its history, “the idea is to expand capacity for future growth,” said Alexander, who also serves as vice president of the Texas Rural Water Association.
Correction: Bruce Alexander’s title was misstated in the Sept. 2 article about Microsoft data centers. He is superintendent of EMCSUD. Gina Mangold is president of the district.
By Kenric Ward
Reporter