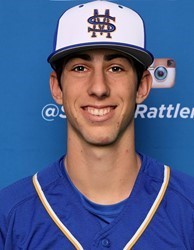 Connor Schmidt, a 2018 Devine graduate who now pitches for St. Mary’s University in San Antonio, earned his first win as a college pitcher in Saturday’s 11-6 victory over West Texas A&M. Connor pitched 6 innings striking out 6 while giving up only 7 hits on 117 pitches.
Connor quieted the bats of the Buffalos who exploded for 13 runs in their game one win. Game two was a much different game with the 6’6”, 178lb right-hander on the mound.
On the season, Connor has pitched 17 innings pitched with 14 strikeouts, 14 hits allowed, 9 base on balls, and 7 earned runs. Interestingly enough, Connor’s first appearance came at Minute Maid Park, the home stadium of the 2017 World Series champion Houston Astros.
By Jerel Beaty
Staff Writer