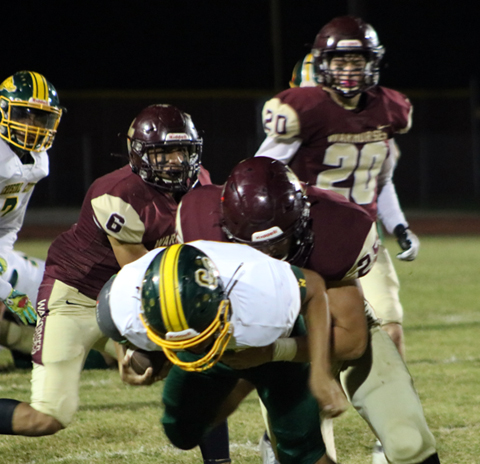 By land or by air
The Warhorses dominantly ran their way to their first seven victories of the season, racking up ridiculous rushing numbers along the way. This past Friday, the Horses passed, yes, passed their way to a 55-12 victory over visiting Crystal City.
Devine quarterback Brady Hackebeil threw for 301 yards and 5 touchdowns, going 7 of 8 in the process. All five touchdown passes came in their blitz-krieg 41-point quarter in which four different players accounted for the five scores.
Hackebeil threw for 261 yards in the quarter, easily surpassing game totals for any other game this season or possibly other seasons as well. He actually threw for more yardage than the 219 Devine gained on the ground.
Going into Game #10, Devine had rushed for 3,224 yards while passing for 578. Those numbers now sit at 3,443 and 879 respectively.
It’s not that they can’t pass the ball, it’s that they haven’t really had to the first 90% of their season. It is nice to know however, that if the rushing game should happen to stumble during the state playoffs, that the Horses can move the chains through their passing game.
With feet or with hands
Peyton Carr hauled in the first touchdown pass of the season in the Warhorse opener against San Antonio Highlands. Since then, Mason Martinez is the only other Devine “receiver” on the roster to take the ball into the end zone.
That trend continued in a big way during the aforementioned 41-point second quarter onslaught that Devine unleashed on the Javelinas.
Four Warhorse running backs combined for the five thrown touchdown passes, with a couple of them coming on simple slip-screens that Crystal City had no idea how to defend.
Gabriel Esquibel caught touchdowns that went for 25 and 51 yards to open the frame, and then Nate Ramirez took one to the house for a 55-yard score.
Ethan Santos followed up Ramirez’s 55-yarder with one of his own, before Hayden DuBose outran everyone for a 75-yard touchdown.
Those four receivers…excuse me, those four running backs…accounted for the 261 yards passing Hackebeil was credited with in the quarter.
“Our running backs were receivers!!!” said backs coach Evan Eads. “All the running backs take pride in running good routes and showing that they have really good hands as well. They are ready for the playoff push.”
Closing act
The sixth and final touchdown of the second quarter belongs to Mason Martinez who picked up a Javelina loose ball and returned it 53 yards with only ten-seconds to go before halftime.
Martinez has had a phenomenal season offensively, defensively, and on special teams.
Merry go round
It was nice to see Warhorse kicker Caden Hanson back on the field booting extra points for Devine. Hanson has been out most of the season after injuring his hip in week two versus San Antonio Memorial.
Devine had some blowout victories during that time, so the extra points did not always come back to haunt the Warhorses score wise.
There was one very important game however where Hanson’s leg would have done the Horses good. After missing their first extra point attempt against Carrizo Springs in the district opener, Devine chased points the rest of the game before eventually losing 33-26.
The Horses failed to convert a two-point attempt in three of their four attempts in their loss to the Wildcats. Here’s hoping for a healthy Hanson during the playoffs to end the need to chase points and to end the merry go round of kickers that have attempted extra points since his injury.
Team stats
Total yards Dev 520, Cry 197, First downs Dev 20, Cry 8, Rushing Dev 48-219-4.56-2TD, Cry 29-189-6.52-2TD, Passing Dev 7-8-301-5TD-0INT, Cry 3-8-8-0TD-0INT, Penalties Dev 9-68, Cry 8-45.
Warhorse stats
Passing Brady Hackebeil 7-8-301-5TD-0INT Receiving Gabriel Esquibel 2-76-2TD, Hayden DuBose 1-75-1TD, Ethan Santos 2-70-1-TD, Nate Ramirez 1-55-1TD, Aiden Zapata 1-25 Rushing Gabriel Esquibel 8-76-9.5, Aiden Zapata 5-41-8.2, Xavier Contreras 4-30-7.5, Ethan Santos 6-26-4.3-1TD, Gus Puente 4-12-3.0, Nate Ramriez 4-12-3.0-1TD, Brady Hackebeil 6-7-1.2, Brandon Martinez 3-7-2.3, Jonathan Weinkam 4-7-1.8, Samuel Guardiola 2-3-1.5, Hayden DuBose 2- -2.
Scoring summary
DEV–Ethan Santos 13-yard run (Caden Hanson PAT), 7-0, 1:44, 1st.
DEV–Gabriel Esquibel 25-yard pass from Brady Hackebeil (Hanson PAT), 14-0, 8:52, 2nd.
DEV–Esquibel 51-yard pass from Hackebeil (Hanson PAT), 21-0, 4:17, 2nd.
DEV–Nate Ramirez 55-yard pass from Hackebeil (Hanson PAT), 28-0, 2nd 2:36, 2nd.
CCJ–73-yard run (conversion failed), 28-6, 2:15, 2nd.
DEV–Santos 55-yard pass from Hackebeil (Hanson PAT), 35-6, 2:01, 2nd.
DEV–Hayden DuBose 75-yard pass from Hackebeil (Hanson PAT), 42-6, 0:35, 2nd.
DEV–Mason Martinez 53-yard fumble return (PAT failed), 48-6, 0:10, 2nd.
DEV–Ramirez 1-yard run (Hayden DuBose PAT), 55-6, 6:13, 3rd.
CCJ–47-yard run (conv. failed), 55-12, 4:08, 4th.
By Jerel Beaty
Staff Writer