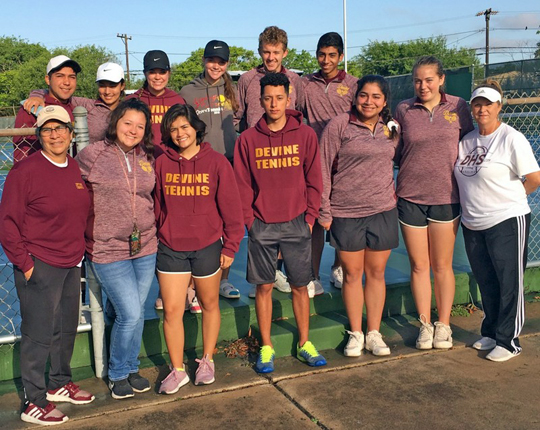 The Region IV AAAA tournament was schedule to begin at 8am. But overnight storms kept the players off the courts until 11am, which made for a very long first day of competition with final matches ending around 8:30pm on the 18th. The first players taking the courts were Warhorse Jake Harrell and Arabian Brooke Runyan who were each district champs in the singles divisions.
Devine Arabian Brooke Runyan came home with a bronze medal, winning 3rd in Girls Singles. Runyan beat Cmerek from Taylor in her first round 6-1, 6-3. Her next opponent was A.J. Beyer from LaVernia whom Runyan has beaten several times this year. She was once again able to win in two sets 6-2, 6-2. Runyan’s next matchup was Fredericksburg’s #2 singles player Olivia Alvarez. Runyan battled as hard as she could but was not able to win this semi-finals match, losing 5-7, 0-6. The next morning Runyan came out fighting and beat Dwanna from Lampasas with an impressive 6-1, 6-2 win for the 3rd place medal.
Warhorse Jake Harrell had a very tough bracket to compete in. Harrell had an impressive first match beating Harlos from Pleasanton 6-1, 6-0. However, his next opponent was an extremely talented player from Fulshear HS out of the Houston area. Even though Jake played some impressive points and fought hard, he lost to Nguyen 0-6, 0-6. Nguyen was able to capture the silver medal in the tournament.
Arabians Malvin Flores and Laurel Spannagel took to the courts next. Since they won 2nd in the district behind Hondo, they had to play a 1st place team from another district. Flores/Spannagel split sets with Ramirez/Alvarez of Zapata who were seeded 3rd in the tournament. They made an impressive first round showing almost beating this salty duo. They won the first set in a tie breaker 7-4 then lost the second set 0-6. They had Zapata down in the 3rd set but couldn’t hang on to the lead and lost 5-7. Zapata went on to win 3rd in the tournament.
Mixed Doubles teams finally got their chance to get on the courts. Seniors Ralph Rios and Scarlett Smith also had to play against a 1st place team in their first round. They battled to beat Ellard/Cravens from Caldwell 6-3, 6-2. Rios/Smith then had to play the #3 seed, Liberty Hill’s team of Ortega/Coleman. Even though they played very well making them earn every point, they lost to this impressive team 2-6, 1-6.
Mixed Doubles seniors Toby Ramos and Preslee Quisenberry competed well and won 4th place. They beat Cobb/Shultz from El Campo in two quick sets 6-2, 6-1. Then they beat Liberty Hill’s #2 team Kizer/Tolby 6-4, 6-3. Their next opponents were the district champs from Fredericksburg, Wainwright/Spies. Ramos/Quisenberry made them fight for every point with many games going to deuce, but Fredericksburg come out on top, winning the semi-finals match with the score of 6-4, 6-2. The next morning, Quisenberry/Ramos played Liberty Hill’s #1 team which had beaten Rios/Smith the day before. Once again the Liberty Hill team was able to keep Devine from a win. This same team won 3rd in State last year. It was a very tough loss for these two seniors whom competed so well throughout the season. The final score was 6-4, 6-2; giving Ramos/Quisenberry 4th place.
“This Regional Tournament is the toughest 4A tournament in the state. The kids that win here will most likely win at the state tournament in May. Each bracket consists of 16 opponents battling till the end, so Devine did quite well with more getting further than ever before. 3rd and 4th in this Region is like winning 3rd and 4th at the State tournament. I’m very proud of all of these kids, but especially the seniors. They’ve been super leaders and will be greatly missed,” said Coach Sostarich.