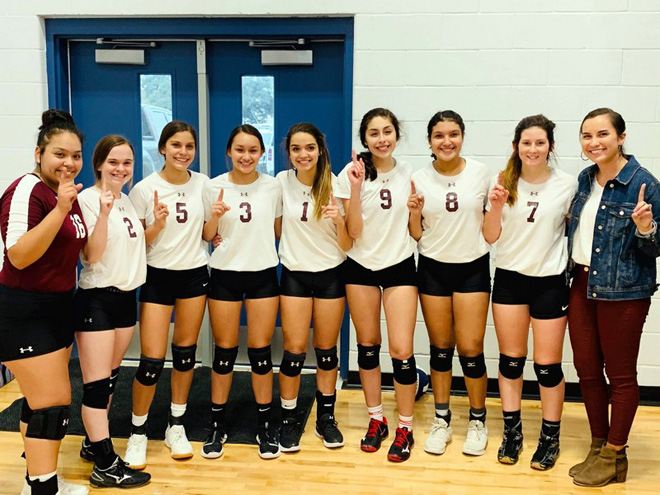 With the district title on the line, the JV Arabians played the best they had all season to beat Hondo in two sets. It was a much closer game than their 25-12 and 25-22 game against them on October 11th. This time the Owls were more aggressive and Devine had to play smarter. The JV Arabians won again this time 26-24 and 25-21.
“I’m beyond proud of this team. They were a great first group for me to coach and I enjoyed watching them grow as players and as a team this season. They came into the Hondo game on fire and met their goal of being undefeated District Champs!” Coach Kailee Ramirez
Kills: Lacey Shook 5, Zoe Gonzales 4, Kaitlyn Morales 1, Bri Torres 2, CeCe Martinez 1. Digs: Shook 4, Brooklyn Crossland 3, Gonzales 2, Moralez 1, Amber DuBose 2, Torres 2, Darian Alvarez 1, Martinez 6. Assists: DuBose 10, Martinez 1. Aces: Torres 1, Alvarez 2, Martinez 2.
The JV Arabians ended their season 18-9 overall and 8-0 in district.
By Dicy Chambers
Sports Writer