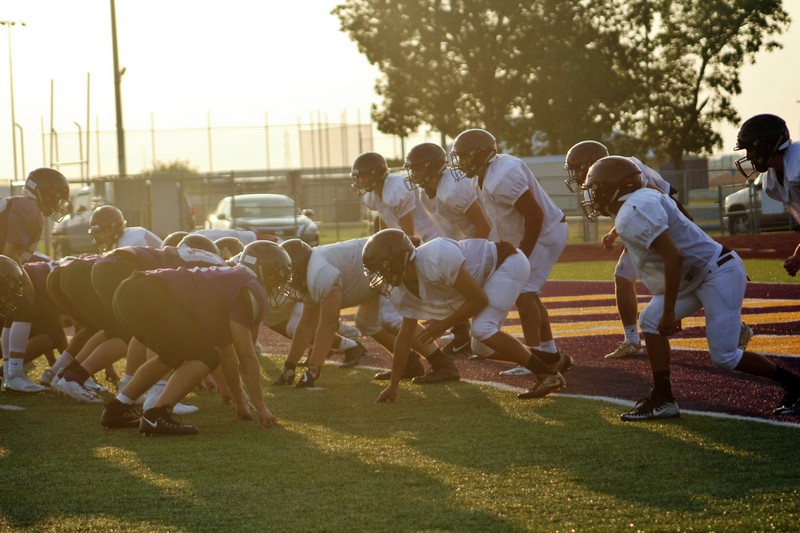 “It is time to focus on the San Antonio Kennedy Rockets.” Those were the first words Head Coach Paul Gomez stated as his team completed their two-scrimmage warmup to complete the two-a-day process and as the Warhorses enter their preseason schedule to begin the 2018 season.
For the last few seasons, the Warhorses have opened their season against the Boerne Greyhounds, a big-school 4A program that boasts an enrollment of 1,099 as the 2018-2019 school year opens. Although Gomez did not renew the schedule of games with Boerne ISD, he chose to open against a SA Kennedy school that has 1,187 students enrolled this year.
The Warhorses have never shied away from tough preseason challenges; that trend continues as Gomez begins his second year at the helm of the Devine football program. “They are big and pretty talented,” continued Gomez. “They are definitely the best SA Kennedy team that I’ve seen in a while.
Offensively, they are big up front; they have quick running backs and good receivers that are capable of making big plays. Their quarterback, also big and strong, can bring a load when someone is attempting to tackle him, but he is also a good passing quarterback that can read the field and throw it to the open receiver.
Defensively, they are also big. They run a 50 defense and their TNT’s are big and strong. They rush the passer and run to the ball. Both their inside and outside backers do a good job attacking the ball and tackling.
It will definitely be a good test for us. My staff and I will put our boys in the best position to succeed, and I know without a doubt that our boys are going to give it everything they have. We have to keep getting better every day with the never-being-satisfied mentality. I am definitely excited to get back to Warhorse Stadium and hope our fans can show up and be loud! We need their support. These boys want to make them proud.”
Kickoff is set for 7:30pm. Be early. Be loud. Let’s show San Antonio what Devine and Warhorse Nation is all about!
By Jerel Beaty
Staff Writer