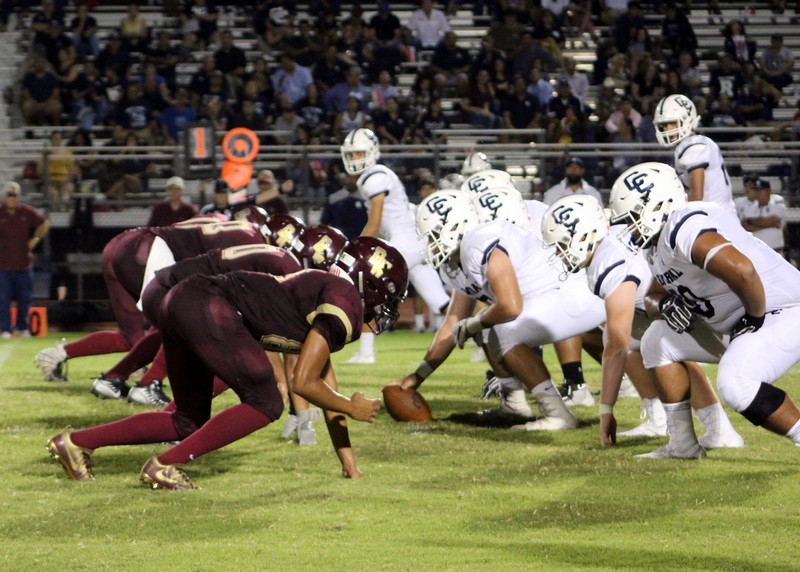 Everyone knows offenses have to score in order to win ballgames. Whether the game is football, basketball, or baseball, the points on the scoreboard at the end of the game is what people look at in assessment of who won the game and by how much.
If you are Devine Defensive Coordinator George Villa or Special Team Coordinator Scott Taylor, those two coaches might look at things a little differently than the common fan. After a game, Villa more than likely turns his attention solely to the visitor’s side of the scoreboard to assess how a difference-making touchdown or two could have been prevented during the game to give the Warhorses a better chance at either winning or winning by more than the final score.
“I know the score board doesn’t show the improvements we’ve made and the quality reps our kids that have had to step into roles have made,” stated Villa. “Defensively, we’ve held our last two opponents to their lowest total yards of the year. Both of those teams are quality teams that will be playoff bound for sure. We strive to get better with every repetition in both practices and games.”
As Coach Taylor walks off the field after a Friday night ballgame, he might rotate his eyes back and forth between the home and visitor score. Thoughts of how a blocked a punt or returned kickoff could have given the offense better field position rattle through his mind. Coach Taylor might also be contemplating how a blocked extra point would have kept points off the opponent’s final score.
“I feel like the special teams as a whole have been solid, but as always we have room for improvement, Taylor said. “I am proud of the younger guys that have helped fill in and have expanded our depth after we pulled them up from the junior varsity.
Our focus will be on getting more excitement and enthusiasm for all the different plays involved in special teams. Players realize that these plays can really influence the outcome of a game and produce momentum. We have been one-step away from a couple of blocked punts and/or extra point attempts. We have been one cut or one block away from even bigger kickoff and punt returns.
Although the players have done a good job of going to their assigned spots, I am just waiting and pushing them to realize what they are capable of and how those capabilities can change a game. They find a way to go even harder and take that one more step or make that dive attempt to block a ball or drive the opponent they are blocking just a few more steps.
Once we do those things on a consistent basis, I, along with the players that take the field on each of our special team’s units, are looking for some great results come district.”
Taylor and Villa understand the importance of their two assignments. When either of their units makes a mistake on the field, a glowing one affects either or both sides of the scoreboard. As the season moves into the second half, Coach Villa’s defensive unit and Coach Taylor’s special teams will play a big role in the final standings of District 14-4A.
By Jerel Beaty
Staff Writer