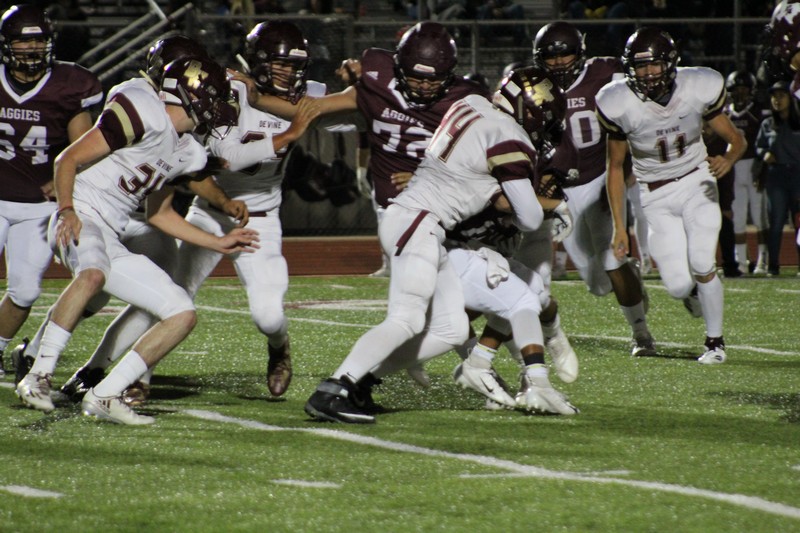 Defensive Coordinator George Villa and Special Team Coordinator Scott Taylor’s units had outstanding performances against the Aggies last Friday night in Poteet. Two of the Aggies three scores on the night came late in the ballgame once the contest had already been decided.
“Our defense played solid again,” stated Villa. “We had different players step up and make things happen for us. We are still making mistakes but we are hustling to the ball like the defensive coaches have preached since the beginning of two-a-days.”
Demi Monreal had another solid game for the Warhorse ‘D’. Demi had 7.5 tackles, a sack, and a fumble recovery. “The last two weeks have gone really well for Demi,” Villa continued. “He’s matured a lot these past few weeks and I couldn’t be prouder of him.”
Head Coach Paul Gomez was pleased with the defensive play as well. “Coach Villa called a great game and our boys played extremely hard. We took away their two best plays and made them do things that they are not used to doing.
Christian Gerlach and Zac Bocanegra played aggressively and ‘took out’ many of their key blockers. Christian had two important sacks as Poteet was threatening to score. I think our outside backers and inside backers made some good plays and our cover guys were solid all game. Isaiah Oropeza and Joey Seguin had their best games to date.”
Linebacker contributions
Coach Evan Eads group had a solid night stuffing the Poteet running game. Brady Cardenas led the way with 4 solo tackles, including a ½ tackle for loss. Jayce Hackebeil had 1 ½ solo tackles to go along with a ½ tackle for loss and ½ a sack. Devin Ornelas and Hunter Nowicki continue to improve weekly.
“The linebackers had a great night,” stated Eads. “They got us lined up and we won the first-down battles by making plays that they were in position to make.”
Special Ops
“Our special teams really came through for us,” Gomez continued. “Their kickoffs have been everywhere and they try to get turnovers off of it with onside kicks and high short kicks. I think we handled that aspect well. We had good punts and covered well when we had to. We almost got another blocked punt which tells me our effort was good.”
By Jerel Beaty
Staff Writer