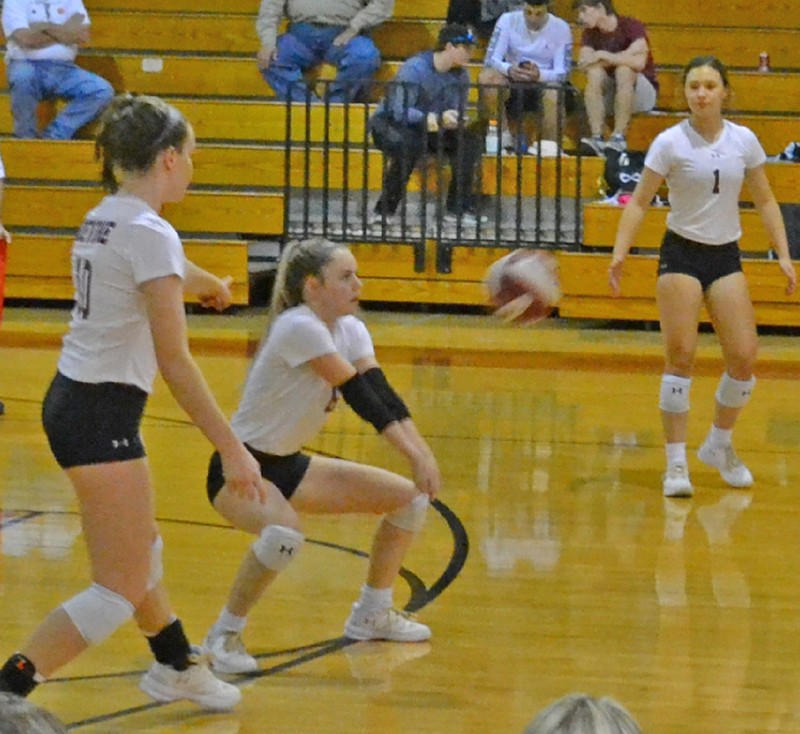 The Area playoff game against the Orange Grove Bulldogs started off great for the Arabians. Coach Leigh Anne McIiver and her team won 3-1 after four sets, 25-15, 18-25, 25-10, and 25-13.
The first point of set 1 came when Sierra Pompa killed the ball back into the Bulldogs court and Orange Grove responded with a kill of their own. Alissa Stehle had an amazing spike from the back row to bring the score 2-1. Pompa followed with another kill on the next play with help from setter Macey Hein. Gabby Rodriguez had an ace on her second serve. OG would call a time out after Pompa killed the ball two more times and the score was 8-3. Megan Runyan got high off the floor to spike the ball into a Bulldog player who returned the ball into the net for a Devine point, 10-8. Pompa spiked the ball into the OG blockers who could not stop her powerful hit. Madison Pike had her first block of the night when the score was 14-8. Pompa spiked the ball and an OG player went under the net trying to return it, 18-8. Runyan had another powerful kill. Dana Aaron dinked the ball into an OG hole to make the score 22-13 and after losing control of the ball after a long volley Orange Grove called another time out. Stehle killed the ball again and with game point on the line, Orange Grove spiked the ball out to end the set.
The second set did not go in Devine’s favor when it ended 18-25 but Pompa had several great kills and a backwards bump over the net that OG was not ready for. Runyan was able to get a kill into Bulldog blockers and a great block.
Set three was when the Arabians took the game back into their control and Pike got the first point when she spiked an incoming returned ball from Orange Grove. The Bulldogs coach called time when the Arabians had a 4-0 lead. Sara Moreno got an ace and then the next play Pike blocked a spike to make the score 7-2. Pike would get a kill into block a couple of plays later 9-3. Next play Pompa faked a spike and dinked the ball over into confused Bulldogs for the point. Another spike for Pompa that was returned however she imminently spiked it back for the kill and the score was now 11-3. Stehle would get a dink past blockers and then a kill for a 15-7 score. Pompa again killed the ball into the Bulldog back row, 17-7. The OG coach called another time out to calm her stressed players. Pike would again prove her strength on the net when she kinked a ball over into a hole and then got a block a couple of plays later. The last two points Devine needed for the win came from Pompa with back to back kills ending the game 25-10.
Devine was ready to end set four as soon as it began with their first five points coming from a Pompa kill, Pike kill, Stehle kill, Pompa kill, and Hein dink for a 5-4 score. The Arabians fell a little behind at 5-7 and trailed until 11-11 when Pompa helped gain the lead with an assist from Hein, Pompa killed the ball into the Bulldog Blockers and then found a hole in their coverage for another kill. With the score 14-11 the OG coach called a time out. Rodriguez gained another ace after the time out when she found an unprepared player. Rodriguez went on about 10 serving streak to help the Arabians control the lead. Pompa earned three more kills before the Bulldogs called their final timeout. Stehle killed the ball into blockers and after a couple more Bulldog mistakes the game would end 25-13.
Sierra Pompa had 23 total kills, 1 block and 16 digs. Dana Aaron had 1 kill and 3 digs. Alissa Stehle had 3 aces in 24 total serves, 8 kills, 5 assists, 1 block, and 17 digs. Sara Moreno had 1 ace, 12 receptions, and 6 digs. Kaylee Howard had 7 receptions and 4 digs. Gabby Rodriguez had 3 aces in 22 serves, 15 receptions, and 35 digs. Macey Hein had 1 ace, 1 kill, 38 assists, and 7 digs. Megan Runyan had 5 kills and 2 digs. Madison Pike had 5 kills, 4 blocks, and 1 dig. Myla Miles, Sydnie Harrell, Clarissa Zamora, and Jasmine Pompa cheered from the sidelines. Coach McIver was assisted by Coaches Megan Perez and Kimberly Lane, as well as managers Saily Sanchez, Bella Gutierrez, and Makayla Perez.
Last night the Arabians played their Regional Quarter final game against La Vernia at 6pm in the Blossom Athletic Center in San Antonio.
By Dicy Chambers
Sports Writer