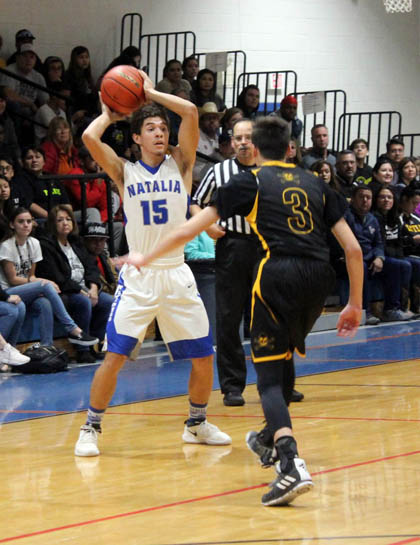 Momentum slowly slipped away from the Natalia Mustangs last Friday night at home. The Stangs found themselves in a defensive first half versus visiting Cotulla before holding a 20-19 edge at the half.
Unfortunately, the momentum slipped away, as Cotulla outscored Natalia 19-8 in the 3rd quarter fueling them past Natalia 58-45 in 30-3A action.
The Stangs started things off strong in their opening quarter, as they used the scoring efforts of Juelian Armendariz, Jimmy Ray Gutierrez and Daniel Ramirez to produce a 14 point effort. This allowed them to hold a six point edge after one quarter of play.
In the second quarter, Cotulla began to come alive offensively, but Natalia still managed to take a 20-19 lead into the half. Matt Contreras scored four of the six 2nd quarter points.
Problems arose in the 3rd quarter, as Cotulla outscored Natalia 19-8 allowing for a 38-28 lead going into the final quarter of play.
Natalia was able to produce their best offensive quarter of the game in the 4th, as Armendariz (6 points) and Gutierrez (6 points) led the charge toward a 17 point effort.
Unfortunately, Cotulla surged past Natalia with a 20 point effort allowing them to run away with the 58-45 victory at NHS Gym.
Scoring Leaders: Armendariz 13, Gutierrez 12, Contreras 7, Ramirez 7.
Final Game
Natalia was at home on press night battling Laredo Harmony in the final 30-3A game of the season.
By Eric Smith