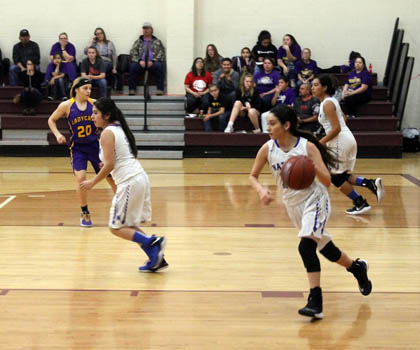 #22 Skidmore-Tynan (21-6, 11-1) flexed their muscles from the tip-off and never looked back Monday night at Poteet High School in the 3A Bi-District battle versus Natalia. The 29-3A Champions not only won the tip and scored quickly, they owned the games’ first 19 points thanks to scoring by four Lady Cats including #10 Kassidy Florence who nailed three 3-pointers in a row. This was only the start in what turned into a long night for the girls in blue as they suffered a 62-19 Bi-District loss.
“Give Skidmore-Tynan credit,” Coach Doug Lum said. “They are a solid ball club, but I am proud of how our kids competed as they fought hard as they did all season long.”
As mentioned, Skidmore-Tynan owned the first 19 points of the opening quarter, as Skidmore outscored them 21-4. Natalia’s Mariah Joseph and KK Lara accounted for one bucket each in the quarter.
The Lady Mustangs settled down and played much better defensively in the second quarter, holding the Lady Cats to just seven points. Katryna Hernandez, Skidmore-Tynans junior post who gave Natalia trouble all night long accounted for six of seven points. She finished the night with 20 points.
On the opposite end of the court, Natalia was able to produce five points, as Zita Perez accounted for three and Lara an additional bucket. This resulted in a 28-9 deficit at the half.
Skidmore went back to work using their inside game to simply dominate the girls in blue in the 3rd quarter. Skidmore-Tynan outscored Natalia 20-3 allowing for a comfortable and demanding 48-13 lead going into the final quarter of action. In the 3rd, Jelli Padilla knocked down a 3-pointer as Perez nailed one of two free throws.
Skidmore-Tynan played their starters until 5:00 minutes to go in the game as they outscored Natalia 14-6 en route to a 62-19 victory over the Lady Mustangs. Destiny Zapata knocked down a three pointer in the final quarter, as Perez scored a bucket and Katelyn Corona a free throw.
Aside from being out-sized and out-matched at almost every position, early turnovers and forced shots were the true difference early on resulting in a hole they never recovered from.
“We worked together as a team and learned a lot about self improvement and sacrifice,” Coach Lum said. “It was a great year.”
Next week, we will take a look back on the season and also take a look at the seniors who Natalia will say good-bye to.
Scoring Natalia: Perez 6, Lara 4, Zapata 3, Padilla 3, Joseph 2, Corona 1.
30-3A Notes: The 2nd seed George West Lady Horns out of 29-3A defeated the 3rd seed out of 30-3A Lytle Lady Pirates 64-34 in Pleasanton on Monday night.
The 30-3A Champion Jourdanton Squaws were also dominated by the 4th seed out of 29-3A Aransas Pass. AP defeated Jourdanton 62-33 in George West.
Dilley was set to battle on press night versus the 3rd seed from 29-3A Odem. No results were available as of press time.
By Eric Smith