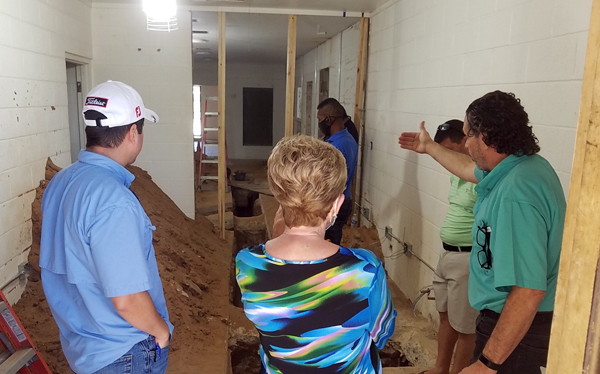 The Devine City Council reversed course last Tuesday, May 11, unanimously approving $32, 710 in change orders for the golf course clubhouse renovation project it rejected just last month.
Council voted unanimously to approve Change Order 1, consisting of revised sanitary sewer and domestic water plumbing for $7,400.80; Change Order 2, assembly of gypboard doors and frames, demolition of concrete masonry units, and installation of fiber-reinforced plastic for $23,070.30; and Change Order 6, which calls for the tape and float of the ceiling and south wall as well as the installation of a wooden support beam where a load-bearing wall was knocked down for $2,240.70.
Change Order 3 upgrading 3/4-inch water pipes to 1 1/2-inch pipes for $1,892 and Change Order 5 upgrading electrical work were approved in a Special meeting on April 15, bringing the total tab for change orders up to $39,552.
Change Order 4 was deemed unnecessary and eliminated from consideration.
Darrell Greco of Greco Construction, the general contractor on the project, addressed Council in lieu of GRG Architecture’s Edward Garza, who was not able to attend the May 11 meeting.
“These were changes given to us by [Garza],” Greco said, “and he sat down with the Council and all of these changes pretty much make it from a limited kitchen to a full-service kitchen.”
Greco said construction was still set to take 120 days and be completed July 30 or August 1, though the installation of kitchen equipment had to be taken into account.
“The equipment needs to be there,” Greco said. “As far as I know, I don’t believe it’s been ordered yet. I’ll tell you right now, with COVID, there’s a long lead time on a lot of items. So you might be calling us back to install this equipment when it gets here, but we’re going to have the kitchen finished.”
Council decided to have the City purchase necessary kitchen equipment, then estimated to cost $92,000 for a limited kitchen, rather than have a contractor purchase it for them when it approved a $342,000 renovation plan on August 18, 2020 (see “Council moves forward with $342k golf course clubhouse reno design” in the Sept. 2, 2020 edition of The Devine News).
Council approved upgrading the clubhouse kitchen from limited to full-service on March 2, following a request by SG Golf Management, the company that oversees the daily operations of the course, and Jerry and Missy Stevens of Charlie’s Daughter restaurant (see “Devine CIty Council opts for full-service restaurant for golf course clubhouse,” March 10, 2021 ed. of the News).
As per their contract, SG Golf Management receives $32,536 a month from the City until the completion of a turnkey renovation of the clubhouse. The Stevenses currently run a food truck in the golf course parking lot and plan to operate Charlie’s Daughter out of the clubhouse once renovation is complete.

“We have all talked about [ordering kitchen equipment] and I don’t think anybody has done it,” District 5 Councilwoman Debra Randall said. “But I do have a lead, or I should say a couple of contacts, that I could send our list to, to see if we could get it delivered and what the price would be. But that’s a separate part of the budget than this.”
Mayor Cory Thompson noted that discussion of kitchen equipment was not part of the agenda, and said that City Administrator John Vidaurri told him that the list of equipment would need to be sent out to multiple people for bids.
“But like I said, that’s not actually germane to what we were talking about,” Thompson said. “But no, that has not been done yet.”
District 2 Councilwoman Angela Pichardo said it was something that Council needed to take into account.
“Within that 120 days we should have the equipment available,” Pichardo said. “The probability of it getting here on time was being questioned, so we’ve got to expedite the bid process.”
Thompson gaveled Pichardo and repeated that discussion of kitchen equipment was not on the agenda.
“Besides the equipment, can you think of anything we’re maybe overlooking?” District 3 Councilman David Espinosa asked.
Greco said nothing had been overlooked, though gas still needed to be brought to the clubhouse.
“We’ll stub it out, and your utility company or gas company will bring it up to that point and then set the meter,” Greco said.
Other selections such as paint colors will also need to be made.
“We sit here for over four thousand people, the taxpayers of this community,” Espinosa said. “That’s what we’re here for. These good folks want to see this project done…I just hope that we’ve got everything covered now and we can move forward with getting it completed.”
Thompson said Council would still have to discuss the renovation.
“This is just to get [Greco Construction] done,” Thompson said.
Pichardo pointed out that the clubhouse is owned by the City, and that it was important to make sure everything was done correctly.
“The City has hired an independent inspector that will be out inspecting us probably about ten different inspections he has to do here on the job,” Greco said. “He’ll turn reporting in to the City, and at the conclusion of the job, as the construction company we’ll be turning in closeout documents and a redline set of plans.”
District 4 Councilwoman Kathy Lawler asked if anything was going to be done about the clubhouse’s uneven floor near the entrance from the golf course side, and Greco Construction’s Gilberto Garza said it had been brought to their attention the previous week, but that there were no provisions for it in the construction documents.
“As you enter off the golf course into the building there’s a small platform,” Greco said. “We are to extend that platform, put handrails on each side of it, and match the tile as best as possible and finish tiling it. Other than that, that’s really the extent of the flooring.”
Thompson said that anybody who walked into the clubhouse would know about the uneven floor, and Lawler questioned if it was ADA-compliant.
“It’s definitely an uneven surface,” Thompson said. “I wish the architect were here tonight to ask that question to directly.”
A motion by Randall and District 1 Councilman Rufino “Flipper” Vega to approve Change Orders 1, 2, and 6 passed 5-0.
Council was set to discuss designating Vidaurri to purchase the kitchen equipment during the Regular meeting scheduled for press night on Tuesday, May 18.
By Marly Davis
Staff Writer

Note: Angela Pichardo’s full name and Council title was omitted from the print version of this article. We regret the error.