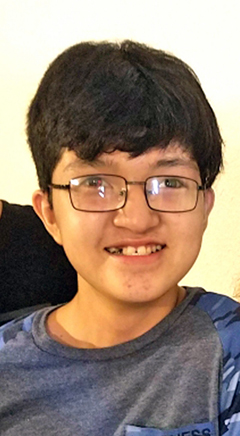 Doctors said young Christian Suwaki-Lopez had little to no chance of survival and asked for permission to take him off life support, shortly after he arrived at the hospital on December 30, 2014. But his mother refused, and nearly five years after the boy’s miraculous recovery, the family felt it was time to meet and thank some of the first responders who saved his life.
The Suwaki-Lopez family stopped in Devine for the special visit this week to meet the EMT Christian Jones and Paramedic Thomas Foster and other first responders who helped at the horrible wreck. A blowout on I-35 caused the family’s van to roll multiple times, and the sliding door was sheared off, causing the boy’s head to strike I-35 as the vehicle rolled across the interstate. The accident happened in Medina County, just north of Natalia.

Emotions were high as 12-year-old Christian Suwaki-Lopez, sat down with the medics and simply said “Thank you for helping save my life.”
During an interview, his mother Mrs. Marina Lopez said, “This is the first time my husband has spoken about the accident which happened in December of 2014. We felt it was time to meet the people who helped saved our son’s life.”
As the medics and the family spoke, they discussed how severe Christian’s injuries were, with head wounds so severe part of his brain was visible. They talked about how he “coded” three times while the ambulance was in-route to the scene of the accident.
“I fought at the hospital because they wanted to take him off life support,” Mrs. Lopez said. “At first they said he had a 0% chance, and then he had a 3% chance and they kept giving us a few more days at a time. I just wanted them to give him a chance…I wasn’t praying for him to live or to die, but just for God’s will to be done.”
While he was in a coma, Christian would wake up for 30 seconds or a minute at a time and during one of those moments he told his mother that he had spoken to God.
As we sat down to talk to Christian, his youthful glow and love for life was evident. With a big smile he politely asked, “Can I tell you a joke first?”
He looked up at me with a big smile waiting for my reply. “Sure,” I said.
“Why did the Chicken cross the road?……To get away from Chick Fil A,” he said laughing.
After sharing a joke and some smiles, we started talking about the traumatic accident and his time in a coma, awaiting surgery.
As he went in and out of a coma, he said, “I saw a big light in front of me. I felt that I was in Heaven. God told me I was going to be okay.” He paused then, as he struggled to put God’s message to him, into words. “And he told me that families are love, and that all families, all over the world are brothers. Just love, love. That is the message he told me.”
Only a month after the accident, he was released from the hospital and started rehabilitation where he made almost a complete recovery. He did lose sight in one eye and hearing in one ear, but that doesn’t faze him at all.
“It is a miracle,” his mom said. “When he woke up, all the nurses cried.”
She proudly adds, “Half of his face wasn’t working, but he was giving the nurses kisses with the other half, and when he stood up, he strummed the oxygen cord like it was a guitar. He is always smiling, and he finds humor in every situation.”
Before leaving, Christian added, “Do not have fear, just trust in God. You don’t need to be afraid.”