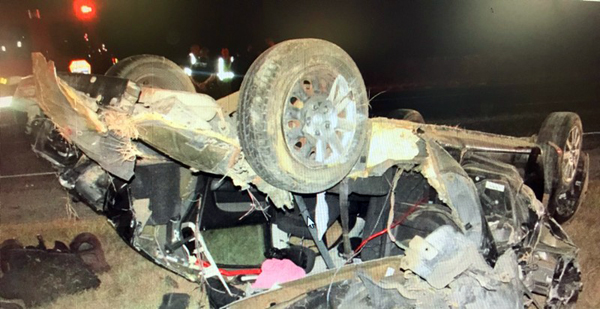 A 16-year-old young lady, Alma Guadalupe Guerra , sadly lost her life in a horrible accident on I-35 N this past Tuesday, August 6 around 2:54 am.

Another passenger, a young boy, was also airlifted. There were a total of six people in the vehicle, which was experiencing mechanical problems. The accident occurred just south of Devine, near the weigh station.
A witness said the car was apparently experiencing mechanical problems and had slowed down to a low rate of speed, “and that eighteen wheeler just couldn’t see them in time.”
“The keyhole of the trunk was crushed up against the driver’s side door,” said Devine Fire Chief Mike Walker. “It was a really bad accident…how the other passengers survived, I don’t know.”
According to DPS, “A 2003 International truck tractor semi-trailer was traveling northbound on IH-35. A 2010 Chrysler Sebring occupied by Alma Guadalupe Guerra, 16, of Eagle Pass was traveling on IH-35 north of the truck tractor. For reasons still being investigated, the truck tractor driver did not see the 2010 Chrysler Sebring and struck it from behind.”
“Alma Guerra was not wearing her safety belt and was killed as a result of the crash. Ms. Ibarra suffered minor injuries. The investigation is ongoing and the contributing factors are still unknown. The Texas Department of Public Safety would like to remind all drivers to minimize distractions, don’t drive fatigued, don’t exceed the speed limit and always wear your safety belt. The crash report can be obtained at Texas.gov once the investigation is completed.”