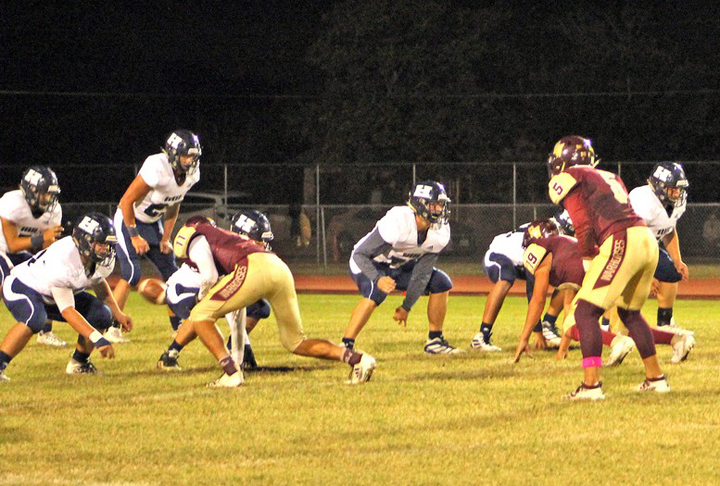 Warhorse Defensive Coordinator George Villa was extremely pleased with his unit’s efforts on Friday night. Giving up only 216 total yards to Hondo in a district opener is worthy of praise.
“What a night it was for our team,” stated Villa. “What I was proud of the most was our effort and attention to detail. The kids really worked on giving us their best effort in practice and it seemed as though it was even better during the game.”
The “attention to detail” Villa spoke about was evident from about the 8:30 mark of the first quarter through the end of the game. Devine allowed a 65-yard touchdown pass on Hondo’s first possession, but that was all the Owls got going into the halftime break. With the Horse’s offense controlling the ground game and seemingly scoring at will, Devine’s defense was able to play even more aggressive.
“Although, we gave up a few big plays, our composure was never broken and they stayed with the plan,” Villa continued. “We reached four out of our 10 team goals that we try to achieve each and every game; we were close to having a few more accomplished though.”
Devine’s defense was outstanding. If a team that only accomplishes four of ten goals can look that good, I can only imagine what achieving six, seven, or eight of those goals would have looked like.
Villa continued discussing the entire defensive efforts, “I thought our front eight did an amazing job of containing their run game. We had some big plays from our defensive ends, tackles and linebackers. Although our outside backers were not called a lot, they did exactly what they were supposed to which helped the other six players. Our secondary did a great job as well. Although we gave up over 100 yards passing, most of that came on one play. Xsavior Martinez did one heck of a job guarding all those fade routes that were thrown at him and came away with an interception…almost had two!! Sergio Martinez, Christian Gerlach, Tristan Kannard, and Mason Burford all had parts in the turnovers that we forced as well.”
Head Coach Paul Gomez was equally excited to talk about his team’s defensive performance saying, “It was our best game to date defensively. On Hondo’s first touchdown, our linebacker had him covered but then just stopped playing for a second thinking the quarterback had thrown the ball already which allowed the fullback to get behind him to catch the ball.”
That early score by the Owls may have had some thinking it was going to be an offensive showcase. It was, at least on Devine’s side. Hondo did not have much luck minus one other drive on the night.
“Our defensive line played on their side of the line of scrimmage all night. Christian Gerlach, Jayce Hackebeil, Jared Fernandez, and Buddy Santos had great games; they played hard. Sergio Martinez, Hunter Maxwell, and Devin Ornelas played great at the linebacker positions. They did not over think; they were aggressive and filled hard. We definitely put some hits on their quarterback and tailback all night. Hondo’s offense revolves around their quarterback position and we made him feel uncomfortable most of the night.”
Uncomfortable is a nice way of saying the Warhorse “D” was rocking. Holding the Owls to 65 total yards on the ground on 26 carries proves Hondo’s running game never got rolling with any type of success.
Gomez mentioned the linebackers and defensive line. He did not stop there stating, “Our rovers also had big time games. Leonard Pompa, Blaine Miller, Peyton Carr, and Justin Contreras did really well. Since Hondo had problems running the ball, they had to put it in the air some. Our defensive backs played really well, especially Xsavior Martinez. Hondo tried to catch us in man-to-man situations with their big play receiver but Xsavior covered him like a glove. I am extremely happy for this kid because he has been slowed down by hamstring problems but we see how dominate he can be when he is healthy. Mason Burford, Xavior Contreras, Isaiah Oropeza, and Brady Hackebeil also had good nights covering pass routes. We look forward to improving even more as we move forward. Great job by Coach Villa sticking with these guys and believing in the scheme.”
By Jerel Beaty
Staff Writer