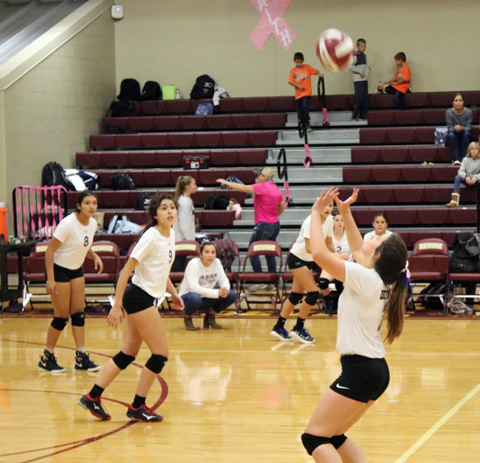 The JV Arabians continue their winning streak after a hard-won game against Pearsall on October 8th. The JV Arabians beat Pearsall in 3 sets. 25-18, 27-25, and 15-7.
“We had a hard time finding the intensity we had been playing with in our previous games,” Coach Kailee Ramirez said. “It was not pretty, but at the end of the day the girls found a way to fight back and come out on top.
“We are going to take the win and get back to work in the gym because we have a big game against Hondo coming up. I’m proud of these girls for continuing to play hard, and I am excited to watch them continue to work towards the goals we have set for this season.”
Zoe Gonzales 8, Bri Torres 3 kills, 1 aces, 1 dig. Darian Alvarez 3 kills, 1 ace, 1 dig. Amber DuBose 3 kills, 3 aces, 18 assists, 1 dig. Lacey Shook 9 kills, 4 aces, 2 digs. Kaitlyn Morales 1 kill. Brooklyn Crossland 1 dig. Cece Martinez 5 aces, 1 dig.
Hondo
It was a come from behind win in the third set that led to the JV Arabians to victory on October 11th. The Arabians dropped their first set 13-25 and it took the whole team fighting hard in the second set to win and force a third. They won the second set 25-23. Hondo got the lead early in the third set, but strong serving and quick defense put Devine back on top half way through the game. The Owls never gave up and quickly came back so the score would bounce back and forth until the end. Devine took the win 26-24.
“Hondo came out more excited to play than us in the beginning, but we managed to fight our way back in the second set and finish them off in the third,” Coach Kailee Ramirez said. “This was not an easy win for these girls. Hondo had a great team. We had to work hard and earn every single point.
“Zoe Gonzales, Darian Alvarez, Katie Moralez, Bri Torres and Lacey Shook all had some incredible hits. CeCe Martinez and Brooklyn Crossland worked hard in the back row to get us some key digs and Amber DuBose had a phenomenal night of setting. The girls really stepped their game up and are now undefeated after the first half of district.”
The JV Arabians are now 4-0 in district and 14-8 overall. They will face Crystal City Friday and Holy Cross on Tuesday. Both games are on the road.
By Dicy Chambers
Sports Writer