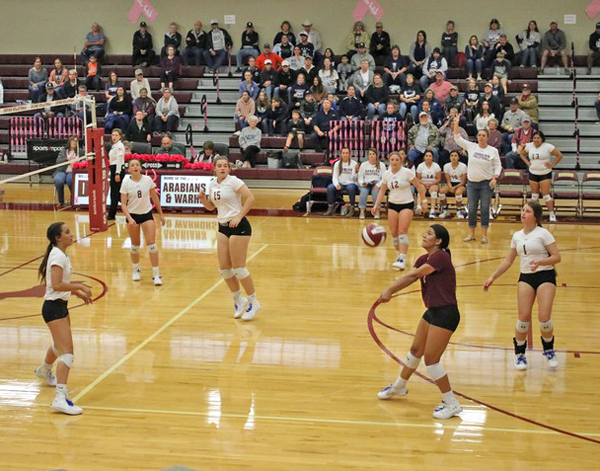 Pearsall
In their third district match, the Arabians made quick work of Pearsall on October 8th. They won in three sets at 25-19, 25-17, and 25-10.
“We did not have our best night but we walked away with the win,” Coach Leigh Ann McIver said. “Having a bye is nice, but I think it can throw the girls off because it takes us out of our normal routine. I will give Pearsall’s defense credit. They did make some great plays on some of our hard hit balls. The girls finally got going in the third set and really showed what they are capable of.”
Kills: Megan Runyan 4, Bailey Oropeza 3, Macey Hein 2, Janaee Wofford 4, Madison Pike 7, Jasmine Pompa 3. Aces: Allison Stevens 1, Runyan 2, Myla Miles 4, Gabby Rodriguez 4, Hein 4, Destiny Moralez 1, Lean Herrera 3. Blocks: Pike 1. Digs: Stevens 10, Runyan 6, Miles 12, Oropeza 2, Rodriguez 21, Hein 12, Wofford 10, Moralez 1, Herrera 2, Pompa 2. Assists: Hein 21.
Hondo
In the rivalry game against Hondo on Friday, the Arabians gave it every thing they had and pushed the game to five sets. The Arabians lost the first set 18-25 but turned the second set around and beat the Owls 25-23. They had to work hard in the third set and use Hondo’s mistakes against them to win it 25-20. Hondo would not be put away in the fourth set; they fought and found holes in the Arabian’s defense. The Arabians lost the fourth set 14-25. In the fifth set, the Arabians started out strong and fought hard but the Owls were victorious winning 15-9.
Kills: Megan Runyan 13, Bailey Oropeza 5, Macey Hein 4, Aleyna Gerlach 1, Janaee Wofford 2, Madison Pike 13, Jasmine Pompa 4. Aces: Myla Miles 4, Destiny Moralez 1. Blocks: Wofford 2, Pike 5, Pompa 5. Digs: Allison Stevens 1, Runyan 37, Miles 10, Oropeza 5, Gabby Rodriguez 49, Hein 24, Wofford 28, Moralez 4, Pike 2, Pompa 2. Assists: Hein 36.
The Arabians will play in Crystal City Friday night and then at Holy Cross for a non district game Tuesday. They will be at home again Friday October 25th against Pearsall.
By Dicy Chambers
Sports Writer