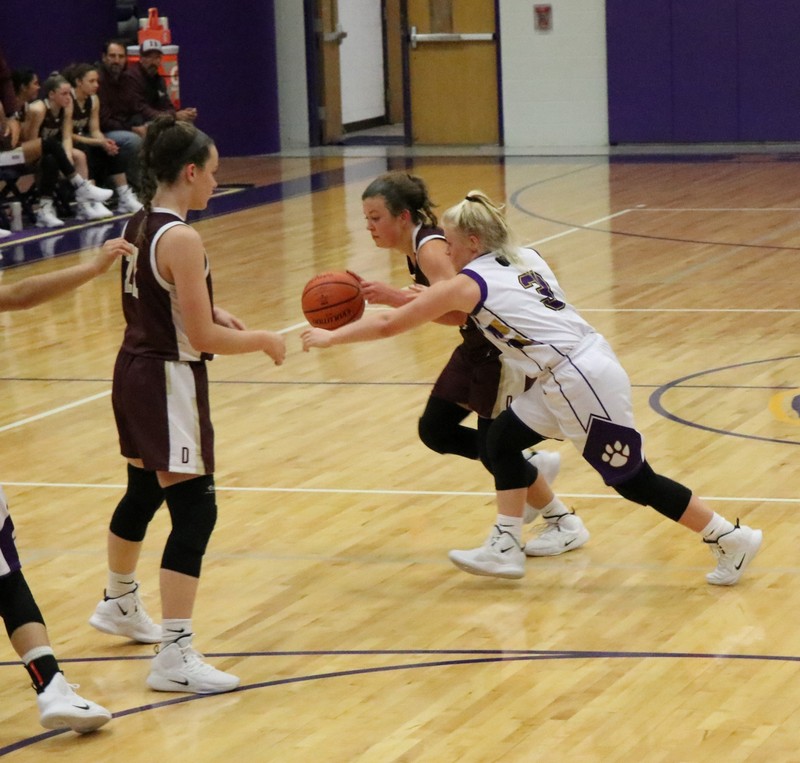 In their first tournament of the season, the Varsity Arabians have brought home first place after three days of tough competition. After three days of games at Cole and with a record of 4-1, the Arabians actually tied with La Vernia and Southside but after the points against each other were tallied, the Arabians were 1 point ahead and that was all they needed for first place.
Preslee Quisenberry was named the tournament MVP and Megan Runyan was named to the all-tournament team.
Devine opened the tournament against Cole and lead the entire game. In the opening quarter, Devine scored 21 points against Cole’s 2 points. The Arabians had 17 points off turnovers, 13 steals, and 47 rebounds. The final score against Cole was 58-25. Q1 21-2, Q2 37-9, Q3 50-17, Q4 58-25.
Southside put up more of a fight and Devine lost their second game 44-56. They came out strong and led the first quarter 10-2 but Southside was able to out shoot them in the second quarter scoring 20 points to Devine’s 11. In the third quarter, Southside was just able to get their play completed and continued to outscore Devine. The Arabians kept playing hard and never let aggressive team get to them. Q1 10-2, Q2 21-22, Q3 33-45, Q4 44-56.
Day 2 of the tournament went much better for the Arabians with two wins. Lytle was the first match of the day and the Arabians made quick work of the Lady Pirates. Leading the whole game, the Arabians ran their offense and controlled their defense to win 48-16. Q1 19-4, Q2 27-10, Q3 40-12, Q4 48-16.
Donna is located between Pharr and Harlingen and the Bravettes made the long drive up to Cole and faced the Arabians in their second match of the day. Donna put up a fight and led at the end of the third quarter, but the Arabians were able to outscore them 21 to 10 in the 4th for the win. Q1 13-6, Q2 15-14, Q3 24-26, Q4 45-36.
On Saturday, the Arabians only had one match up left against La Vernia. Devine came out strong and led the entire game out shooting La Vernia in 3 of the 4 quarters. The Bears could not keep up with the Arabians fast pace and aggressiveness. Q1 13-5, Q2 24-18, Q3 37-29, Q4 51-37
Stats against Cole: Alissa Stehle 1 point, 5 rebounds, and 1 steal. Sierra Pompa 12 points and 10 rebounds. Macey Hein 14 points, 3 rebounds, 3 steals, and 2 blocks. Preslee Quisenberry 14 points, 2 rebounds, and 2 steals. Megan Runyan 2 points and 5 rebounds. Karli Geyer 1 rebound. Gabby Rodriguez 2 rebounds. Clarissa Zamora 9 points and 5 rebounds. Ally Taylor 2 rebounds. Maddie Mata 6 points, 6 rebounds, and 2 steals.
Stats against Southside: Stehle 6 points, 3 rebounds, and 1 steal. Pompa 8 points, 7 rebounds, and 2 steals. Hein 8 points, 8 rebounds, and 1 steal. Quisenberry 5 points, 6 rebounds and 2 steals. Runyan 2 points, 4 rebounds, and 1 steal. Rodriguez 1 rebound. Zamora 9 points, 3 rebounds, and 2 steals. Mata 6 points, 3 rebounds, and 2 steals.
Stats against Lytle: Stehle 5 points, 4 rebounds, and 5 steals. Pompa 8 points and 4 rebounds. Hein 10 points, 2 rebounds, and 5 steals. Quisenberry 3 points, 6 rebounds, and 2 steals. Runyan 10 points and 5 rebounds. Geyer 1 steal. Rodriguez 2 rebounds. Taylor 4 points and 4 rebounds. Mata 6 points, 6 rebounds, 2 steals, and 1 block.
Stats against Donna: Stehle 6 rebounds and 3 steals. Pompa 10 points, 15 rebounds and 2 blocks. Hein 12 points and 3 steals. Quisenberry 19 points, 7 rebounds and 2 steals. Zamora 6 rebounds. Mata 1 steal and 1 block.
Stats against La Vernia: Stehle 8 rebounds and 1 steal. Pompa 6 points, 5 rebounds, 2 steals, and 1 block. Hein 7 points and 3 steals. Quisenberry 22 points 4 rebounds, and 1 steal. Runyan 5 points, 10 rebounds and 2 steals. Zamora 6 points and 6 rebounds. Mata 5 points and 5 rebounds.
Overall the Arabians made 64% of their free throws, stole the ball 58 times, caused 74 fouls, and had .74 points per possession.
“In all, the Cole tournament was a great growing experience for us this weekend. We saw five different teams, all with unique characteristics, that we had to adapt to and play against. We saw a variety of defenses and several presses and did well against most of them. We played against teams that were quick, physical and aggressive. The girls did a great job of stepping up and handling each situation. In doing this, we also found out some things about our team as well. People really stepped into some roles, whether defensively, on the boards, or offensively and that was big for us. I thought this weekend allowed us to start to define who we might be as a team. This weekend was a great team effort!! I was very pleased with the result of this weekend and I am looking forward to seeing what the rest of the season holds for this team,” stated Coach Jim Sessions.
Up next for the Arabians is Bandera at home on November 27th and another 3-day tournament at Marion starting on November 29th.
By Dicy Chambers
Sports Writer