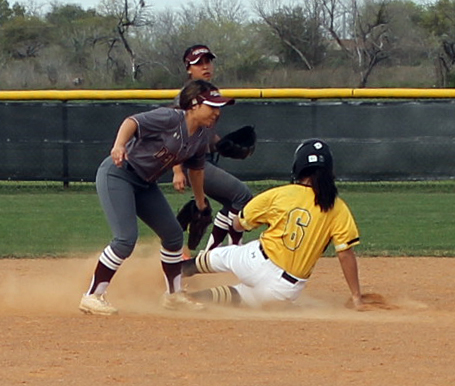 The Varsity Arabians are now 3-3 in district play after two hard losses against Lytle and Carrizo Springs. Facing Lytle on April 3rd, the Arabians lost 18-2 and after a hard week of practice they were hoping to turn it around. However, Friday was another disappointing loss against Carrizo Springs 7-6. In this close match, the Arabians had 11 errors but had 10 hits.
“We cannot go back and change anything, just have to learn from our mistakes. We will keep working at practice to get things turned around and make a charge in the playoff,” said Coach Mark Mangold.
Highlights from the Carrizo Springs game were impressive. Taylor Carr hit .500 with a single and a double, Jeanette Rios .500 with two singles, Halle Hagdorn hit a double, and Jessie Ramirez and Allyson Taylor each had a single.
Only two district games remain for the Arabians before play offs with Crystal City on April 13th and Pearsall April 17th.
By Dicy Chambers
Sports Writer