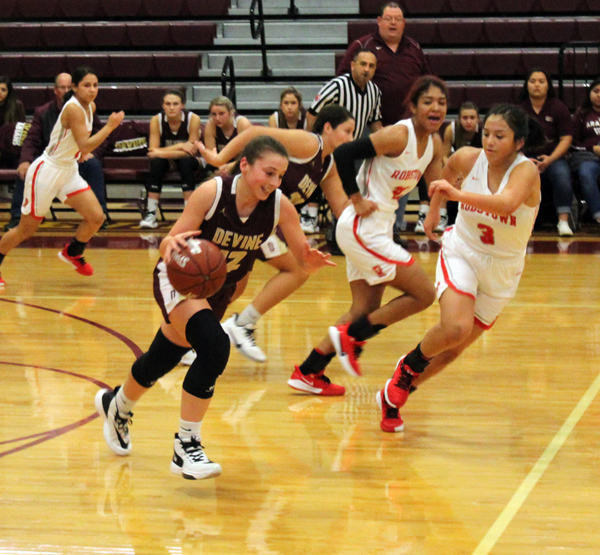 The Arabians played two games in two days against tough teams to start the new year. Facing Poth on January 2nd and Fredericksburg on January 3rd, the Arabians lost both games but came away stronger and more prepared for district.
“We lost a tough game to a good Poth team to open up the New Year. We got off to a good start against Poth and played well in the first half. We got some good shots early in the second half, but we could connect on them. We also did not do a good job of taking care of the ball in the second half and Poth did a good job of capitalizing on those turnovers.” Coach Jim Sessions
Points: Macey Hein 8, Yessika Garza 2, Megan Runyan 7, Maddie Mata 6, Clarissa Zamora 9, Ally Taylor 3. Rebounds: Lacey Shook 1, Hein 7, Runyan 6, Mata 5. Zamora 2, Taylor 3. Steals: Shook 1, Hein 3, Runyan 1, Zamora 1, Taylor 1, Janaee Wofford 1. Blocks: Hein 2. FTP 50%. Q1 13-8, Q2 21-21, Q3 28-31, Q4 35-47.
Fredericksburg lost 37-68
“We turned around and played a very good, physical Fredericksburg team on Friday. W played well early in the game. We handled Fredericksburg’s pressure early and we did a good job of attacking that pressure and turning it into points. We were solid defensively and were in the game in the first quarter. We didn’t do as good of a job attacking Fredericksburg on offense going forward in the game. We struggled on the boards against Fredericksburg. We gave up way too many offensive rebounds and second chance points. We turned the ball over too much in the second half and Fred took advantage of that with lots of points on turnovers. We lost of defensive energy as well. It made for a tough game, but I feel that there was a lot learned during this game.” Coach Sessions
Points: Shook 3, Hein 5, Garza 2, Runyan 4, Mata 7, Zamora 8, Taylor 6, Wofford 2. Rebounds: Gabby Rodriguez 2, Shook 1, Hein 2, Brianna Bowyer 2, Garza 2, Runyan 1, Mata 3, Zamora 3, Taylor 1. Steals: Rodriguez 1, Shook 1, Hein 5, Garza 1, Runyan 1, Zamora 1. Blocks: Mata 1. FTP 63%. Q1 13-17, Q2 21-35, Q3 30-48, Q4 37-68.
“As for district play, we start on Friday against a scrappy, competitive Hondo team. Hondo plays well together as a team and they move the ball around to several people. They press and play an aggressive zone defense. We will have to be solid on defense against them and we will have to take care of the ball. If we can do that, I think we have a great chance to win. As for district play as a whole, I feel like it will be a good challenge for us. Hondo and Crystal City will be tough competition in district play. Again, if we can play solid defense, and take care of the ball on offense, I think we will be in the running for winning the district.” Coach Sessions
The Arabians are 17-5 overall and will play Hondo at home Friday, in Carrizo Spring Tuesday, and back at home against Crystal City.
By Dicy Chambers
Sports Writer