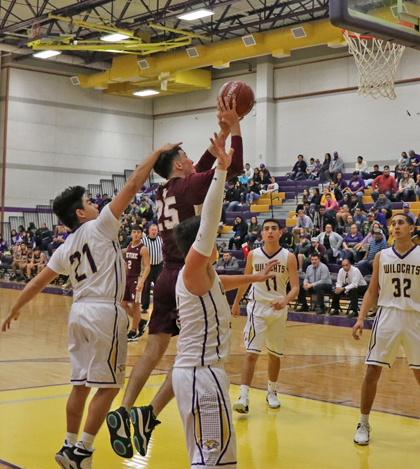 Coach Paul Wells lead his team to another win over Pearsall last Friday night. It was a “well rounded game with great effort,” said Coach Wells and the score of 66-46 proved that.
The Warhorses opened the game out shooting the Mavericks 18-8 to take control of the game early and establish the pace of the game. Leonard Pompa, Dalton Kramer, and Cash Walker each had a three pointer in the first quarter. The Warhorses continued to play aggressively in the second to end the half 30-18. Pearsall continued to play hard but could never close the gap and Devine’s lead continued to grow until the end when they won 66-46.
Cash Walker scored 39 points including four 3 pointers, Brady Cardenas 7, Justin Contreras 6, Kramer 5, Pompa and Kam Adams and Sergio Martinez with 3 each.
Crystal City
In their 5th district game, the Warhorses pulled out a great win over Crystal City.
The Warhorses led at the end of the first quarter but fell behind at 26-28 at the end of the half. Both teams shot well in the third quarter but Crystal City’s lead grew to 47-41. It was in the final quarter that the Warhorses went on a 20-2 run that sealed the 70-54 win for Devine. In the fourth quarter alone Leonard Pompa sank two 3 pointers, Dalton Kramer made 6 of 6 free throws and Cash Walker scored 10 points. It was an exciting way to end the game for Devine.
Pompa led with 27 points, followed by Walker 14, Justin Contreras 12, Brady Cardenas and Kramer with 6 each, Kam Adams 4, and Mason Burford 1.
The Warhorses made 22 of their 36 free throws.
Scores by quarter: Q1 16-10, Q2 26-28, Q3 41-47, Q4 70-54.
The Warhorses are now 4-2 in district and 17-11 overall. They will face Hondo Friday night and then Carrizo Springs on February 12th.
By Dicy Chambers
Sports Writer