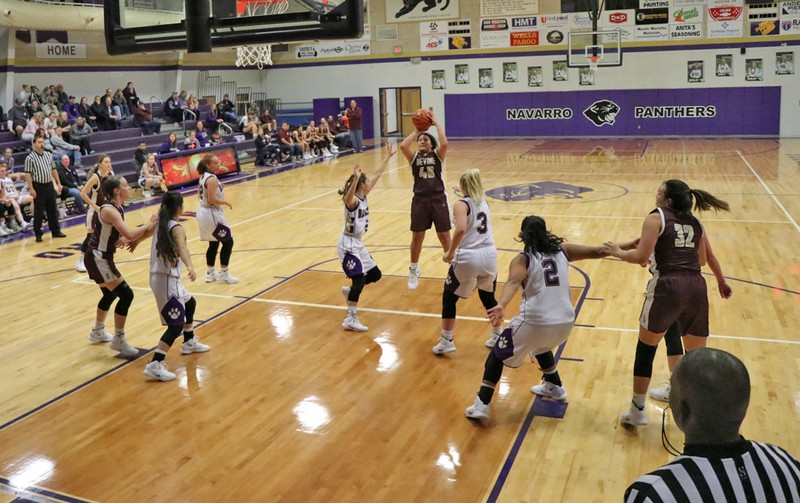 Saturday, the Arabians faced the Navarro Panthers and after overtime, the Arabians lost by one point 72-73. The Arabians have not had much practice time as a full team and are adjusting to new players in new positions.
Devine started off the game with the lead at the end of the first quarter 15-10. Navarro was able to outscore the Arabians in the second quarter 12-18 and Navarro lead at the half 27-28. Coming out of the locker room in the second half, the Arabians were determined to stay strong and stay in the game. Trailing 47-49 at the end of the third, the Arabians were able to control the game a little more and outscore the Panthers 16-14 and end the game in a tie 63-63. With their first game going into overtime, the kept playing aggressively and hard until the final buzzer sounded and they trailed 72-73.
“Things went well for the first game despite the loss. I thought we did a lot of really good things – especially considering we had 3 days of practice before the game. I saw a lot of great things and the effort was great as well. We have plenty to work on, but I think we will get there this season. We have to work hard to get better every day from here on out. I am really looking forward to working with this group this season.” Coach Jim Sessions.
#5 Alissa Stehle scored 2 points, 4 rebounds, 2 steals and 1 block. #10 Sierra Pompa had 8 points, 4 rebounds, and 2 blocks. #14 Preslee Quisenberry scored 21 points including 9 free throws and 2 3 pointers, 1 rebound and 1 steal. #22 Megan Runyan had 17 points including a 3 pointer, 6/8 free throws made, and 11 rebounds. # 30 Gabby Rodriguez had 1 rebound. #32 Clarissa Zamora scored 10 points and 6 rebounds. #40 Maddie Mata had 7 points, 2 rebounds, 2 steals, and 2 blocks. #12 Macey Hein had 7 points, 3 rebounds, and 4 steals. Also filling out the varsity squad is #24 Karli Geyer, #15 Kaylee Howard, and #32 Ally Taylor. The team shot 50% on their free throws and committed 21 turnovers while forcing Navarro to turn the ball over 27 times. The Arabians also had 28 fouls.
Up next for the Varsity Arabians is the Cole tournament this Saturday, Medina Valley at home November 19th, and at La Vernia on November 20th.
By Dicy Chambers
Sports Writer