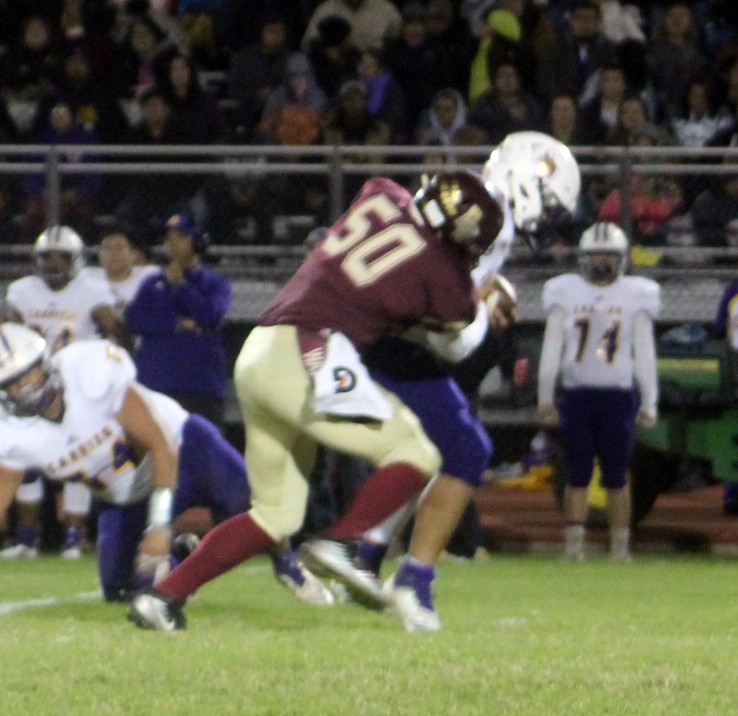 Devine’s defense continued its solid play limiting Carrizo Springs to 199 yards total offense. Carrizo tried to establish a ground game by running 49 times but the Wildcats netted a mere 197 yards. Even though the Wildcats receivers got open from time to time, they were not able to haul in the receptions for decent gains. Carrizo Spring’s quarterback finished 1 of 10 for only two yards.
“I thought as a whole our defensive played well,” stated Defensive Coordinator George Villa. “We were not always lined up correctly but our effort and hustle covered up the miss alignments. We were aggressive and physical…especially that first half. I was glad we were able to see some kids that have not seen a lot of action. We were able to evaluate those players.
Head Coach Paul Gomez’s take on the defensive unit, “We really flew around aggressively and played hard. Coach Villa has these boys playing their best football at the right time. Our attitude is great and we were disciplined Friday night. We truly play team defense. Everybody takes pride in doing their job by taking care of their gaps and everyone pursued to the ball.”
“Special teams got a boost with the return of our kicker Grant Collins,” stated Special Team Coordinator Scott Taylor. “He was six for six on extra points and helped the kickoff squad by booting the ball deep creating an average starting point for Carrizo Springs at the 28-yard line. He was even in on a tackle. Sergio Martinez had several tackles on special teams and Chad Lawson punted well as always.”
“It was exciting to have Grant back on the field again,” stated Gomez. “I think we had a really impressive night special team wise and Coach Taylor has his players executing well.”
By Jerel Beaty
Staff Writer