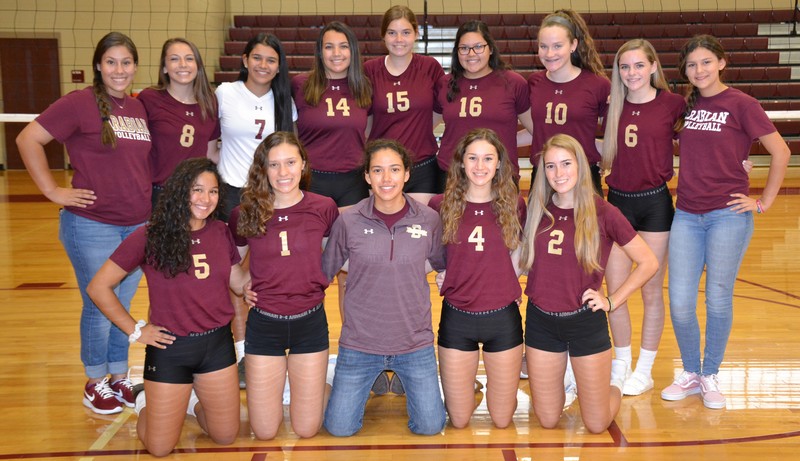 Last weekend the Varsity Arabians went to the SMH Volleyball Invitational and after a long day of pool play, the Arabians ended last Friday second in pool play. Facing New Braunfels Christian Academy in their first game, the Arabians couldn’t get above the net fast enough to block the ball and that hurt the Arabians game. They lost their first game in two matches 16-25 and 19-25 but turned everything around to stomp Dilley in two quick matches. Finding their focus and with stronger spirits, the Arabians win 25-9 and 25-7. “Everyone did a great job of staying focused in this game and finishing the game,’ said Coach Leigh Anne McIver.
Oakridge Academy was the final game of the day and the Owls took the Arabians to 3 matches. Starting the first match strong and aggressive, Devine won 25-16 but fell short in the second match 16-25. In the final match of the day, the Arabians fought hard for each point an beat the Owls 15-12 to earn secondin pool play.
Saturday morning did not start with a win. Facing Needville, the Arabians lost in 2 matches, 15-25 and 13-25. Needville kept finding holes in the defense and Devine was not able to get the digs consistently this game. Needville would go on to win first place.
The Arabians woke up in their second game of the day against Trinity Valley. “We played much better this game and were more active on defense and much more aggressive on offense. Everyone did a great job contributing!” – Coach McIver. The Arabians earned the win with scores of 25-15 and 25-17.
The consolation match was against Medina Valley and it was a hard loss for the Arabians. Coach McIver said, “We were just off it and could not get solid attacks on the ball.” It was a hard loss but the Arabians worked hard on each play and never gave up. After this tournament, the Arabians season record is 12-10.
Coach McIver took a full team to the tournament including Sierra Pompa, Dana Aaron, Julie Ortiz, Alissa Stehle, Sara Moreno, Kaylee Howard, Gabby Rodriguez, Macey Hein, Megan Runyan, Clarissa Zamora, Madison Pike, and Jasmine Pompa.
Sierra Pompa was named to the All-Tournament team!
Devine lost in two games 16-25 and 19-25 to New Braunfels Christian Academy. Offensively, there was one ace scored by S. Pompa 1. In kills S. Pompa led with 8, followed by Stehle and Runyan with 3 each, Aaron with 2, and Hein and Pike with 1 each. Hein assisted 16 times and Stehle once. Defensively S. Pompa and Pike each had 1block. Rodriguez led the digs with 14, followed by S. Pompa and Stehle with 6 each, Howard 4, Moreno 3, Hein 2 and Aaron 1. The Arabians had 3 errors.
Devine won two games against Dilley, 25-9, 25-7. Offensively Rodriguez led with 8 aces, followed by Hein 3 and Moreno 1. In kills S. Pompa led with 11, following by Aaron and J. Pompa with 3 each, Stehle 2 and Zamora 1. Defensively Hein had 21 assists and J. Pompa had one block. Also, Rodriguez led with 15 digs, Stehle 8, Moreno and Hein with 6 each, S. Pompa 5, Aaron 2, and Howard and Runyan with 1 each. The Arabians did not have any team errors.
Devine played three games against Oakridge, 25-16, 16-25, 15-12. Defensively S. Pompa led with 3 aces, while Aaron and Rodriguez each added 1. Kills: S. Pompa led with 12 kills, followed by Stehle 6, J. Pompa 2 and Runyan and Pike each with 1. Defensively Hein led with 21 assists and Moreno 1. In blocks: Aaron, Hein, and Pike each had 1. S. Pompa led the team with 16 digs, followed by Rodriguez 15, Moreno 9, Stehle 8, Hein 7, and Aaron, Howard, and Runyan each with 2. The Arabians had 3 team errors.
Devine played two games against Needville losing 15-25 and 13-25. Defensively, S. Pompa led kills with 6, assisted by Stehle and Runyan with 2 each and Aaron and Pike with 1 each. Hein led in assists with 11 and Moreno added one more. Offensively, S. Pompa and Pike each had 1 block. In digs, Stehle led with 8, followed by S. Pompa and Rodriguez with 7each , Moreno and Hein with 4 each, Runyan 3 and Howard 1. The Arabians had 4 team errors.
Devine beat Trinity Valley in two games, 25-15, 25-17. Defensively S. Pompa led with 4 aces, Stehle 3, Hein 2 and Rodriguez 1. S. Pompa and Runyan led with 6 kills, followed by Stehle 5 and Aaron, Hein, Zamora and J. Pompa with 1 each. Defensively, Hein led with 21 assists while Pike had 1 and Moreno had 2 blocks. Rodriguez led with 10 digs, followed by S. Pompa and Howard with 7 each, Stehle 6, Moreno 5, Hein 3 and J. Pompa 2. The Arabians had 2 team errors.
Devine played two games against Medina Valley, 17-25, 17-25. Offensively Aaron had 1 aces and S. Pompa led kills with 7, assisted by Stehle 4, Runyan 2 and Aaron 1. Defensively Hein had 13 assists and Stehle 1. In blocks Aaron and Pike each had 1. Finally, S. Pomp led with 17 digs, followed by Rodriguez 10, Howard 9, Hein 7, Moreno 5, Stehle 4 and Runyan 3. The Arabians had 7 team errors.
By Dicy Chambers
Sports Writer