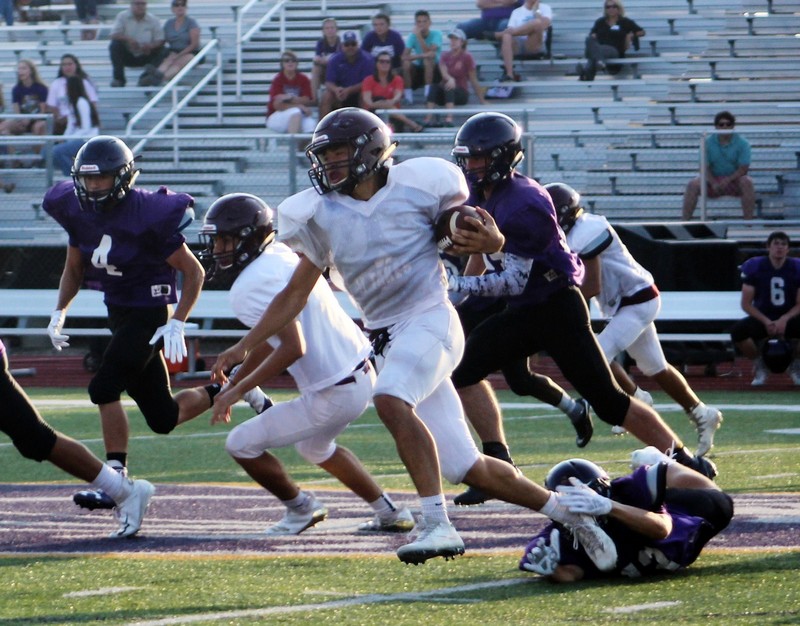 The Devine Warhorse varsity football team closed their 2018 camp with an impressive showing against the Panthers in Navarro last Thursday. The Warhorses won the scrimmage overall by a four touchdown to three touchdown advantage.
“The scrimmage went extremely well,” according to Head Coach Paul Gomez. “It’s always good to scrimmage Navarro because they go right at people’ they ‘hit you in the mouth’ so to speak. You have to respond with aggressiveness or they will take control of the game.”
Gomez elaborated further on his team’s overall performance, “We started off sluggish and passive and Navarro really took it to us the first series. The defense did well first series but gave up a couple of big plays to let Navarro into the end zone.
As the scrimmage continued, we became the aggressor to take control on both sides of the ball. Chad Lawson and Justin Contreras did a good job of running our offense and just being the playmakers that they are capable of being. Donovan Camacho made a good catch in the end zone for a touchdown and Guido Zapata made big plays for us, especially the go-ahead touchdown-catch to end the game in the live quarters.
Our offensive line did a good job adjusting and maintaining their blocks and trusting techniques they have been coached to do. We have some athletes that can make big plays for us. We need to o-line to hold blocks just a little longer.
Grant Collins ran the ball hard. He is going to have to be our workhorse and get those tough yards. Having that come to fruition will allow Guido and Donovan to take advantage of certain situations, whether it be running the perimeter or catching passes. Offensive Coordinator Coach PJ Wells utilized a good mix of offensive plays to keep Navarro off balance.
The defense continues to perform at a high level. If the players are not disciplined and aggressive against this offense, Navarro can really do a number on teams they go against. Our boys played both disciplined and aggressive, which allowed us to take over the momentum of the scrimmage. A, all-necessary goal-line stand in the last quarter that gave our offense the ball and a chance to go score before the end of the scrimmage was big time by our players. Defensive Coordinator Coach George Villa did a great job getting these boys ready for this test.
Overall, I was pleased with our effort and execution. It is good to see the process of our growth. Struggling early, overcoming adversity, and being able to make plays offensively and defensively under pressure-type situations will help these boys down the road. We still have lots of room for improvement, and our team needs to keep climbing that ladder without taking any steps backwards. We look to continue to build on the positives, fix the negatives, and to continue to progress toward our goals for the season.”
Stats/Comment
Guido Zapata had four rushes for 9 yards, 4 receptions for 158 yards, and 2 touchdowns. Donavon Camacho had one reception for 8 yards. Isaiah Oropeza contributed one catch for 8 yards.
“As a group, we did a great job running routes and catching balls. We need to continue to improve blocking techniques. Their overall effort was good.”—Coach Scott Taylor
By Jerel Beaty
Staff Writer