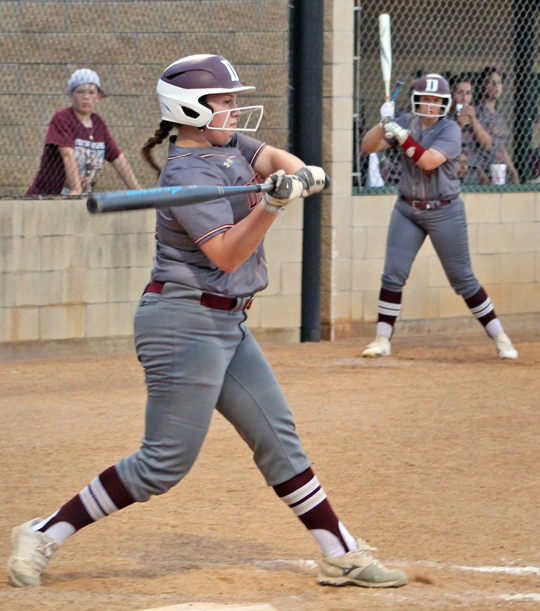 In a rematch against the only team to beat them in district, the Varsity Arabians crushed Pearsall 8-1. Devine lost the first game to Pearsall 3-21 but this time the Pearsall batters couldn’t get past Devine’s defense if they could get a hit off of pitcher Mackenzie McClellan. Throwing 55 strikes in 88 pitches, McClellan only allowed 6 hits.
“Going into the game, I told the girls that it’s about us. If we play our game, make the routine plays, throw strikes, and compete at the plate that the outcome will be in our favor. McClellan did another great job for us in the circle, defense played very well, and we got timely hits when runners were on base. Mackenzie Schneider did a great job driving in our first two runs of the game, and backed up by Kendall Arche and Jessie Ramirez who hit a 3 run HR in the top of the 7th,” stated Coach Juan Gonzalez .
The game was scoreless until the top of the third, McClellan singled to left and Dawn Morris came in to run for McClellan. Schneider doubled to center and Morris scored to put Devine on the score board first. Top of the fifth, McClellan singled, Morris in to run, Schneider triples to right, and Morris scored. Julie Ortiz struck out to bring up Jeanette Rios. Schneider scored on a passed ball. Inning ends 3-0. Top of the seventh, 1 out, bases loaded with Morris, Schneider, and Ortiz, Arche singled to center and Morris and Schneider score. With two Arabians on base, Ramirez hits a home run with a line drive to deep center field. Pearsall would score one run in the bottom of the seventh. Devine won 8-1.
Ortiz 1 run. Rios 1 run, 1 hit. Arche 1 run, 1 hit, 2 RBIs. Ramirez 1 home run, 3 RBIs. Megan Runyan 1 hit, 2 stolen bases. McClellan 2 hits. Schneider 2 runs, 3 hits, 2 RBIs. Morris 2 runs.
“I am so proud of all the hard work these girls put in from the first day of off-season, and to be able to call ourselves the 29-4A District Champion is a great feeling. These girls should be very proud of everyone on the team. No matter how big or small of a roll each kid plays, we couldn’t have done it without them playing as a team and putting the TEAM FIRST.
We set more goals than just winning the district championship, so we are going to continue to work hard every day and put in the work to make a run in the playoffs,” said Coach Gonzalez.
Pearsall lost to Hondo on Friday night ending their district season 6-2, Hondo 5-3, Carrizo Springs 2-6, and Crystal City 0-8.
By Dicy Chambers
Sports Writer