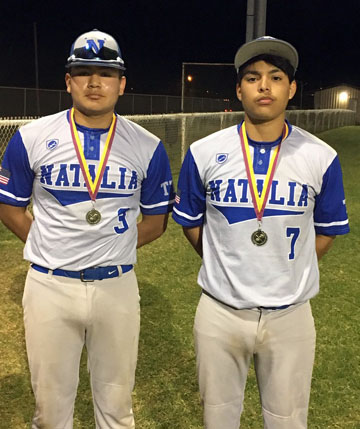 The Natalia Mustangs opened their season in Charlotte last weekend for a three day tournament. The Mustangs were able to snag two victories, while finishing with a tie and a loss.
Natalia battled the LaPryor Bulldogs in the tournament opener. Natalia used two pitchers during the four inning contest as Matt Contreras (3.0) and Jeremiah Gomez (1.0) saw the mound.
“Matt and Jeremiah pitched and both threw well, but LP was able to hit the ball and put it into play,” Coach Jeff Terry said.
LP was able to strike first in the top of the inning, as they used a single, one stolen base and two passed balls to take a 1-0 lead.
Natalia responded, scoring three big runs in their opening at bat. Natalia’s AJ Felker got on thanks to a walk, before watching Jeremiah Castro single, Manuel Garcia get on with a walk. All three would end up scoring allowing Natalia to take a 3-1 lead.
LP did their final damage in the top of the 2nd, as they used one walk, two singles and a double to score four big runs to take a 5-3 lead on Natalia.
The Mustangs battled back, as they scored a run in the bottom of the 2nd. They used a walk, a Felker double and a fielder’s choice put into play by Castro to score their 4th run of the game.
Natalia’s game tying run came in the bottom of the 4th. AJ Felker singled and later scored thanks to a double by Matt Contreras. This game would end tied, 5-5.
Contreras finished allowing four hits, walked one, struck out four and allowed five runs, fo8ur of which were earned. Gomez allowed one hit, struck out one and allowed 0 runs.
At Bat: Diego Zapata 0-1, Manuel Garcia 1-2-2RBIs-1run scored, Jeremiah Castro 2-2-2runs scored, Joel Mendez 0-0, Matt Contreras 1-2, AJ Felker 0-1-2runs scored, Matt Billalobos 0-1, Uriel Arellano 1-2, Fabian Ruiz 0-2-1RBO and Jeremiah Gomez 0-2-1RBI.
Defensive Put-Outs: Zapata 5, Gomez 2, Castro 2, Billalobos 1, Ruiz 1.
In Natalia’s second game of the tournament, they came up short versus the Charlotte Trojans by a score of 2-1. No stats were available for this game due to a technical error.
The Mustangs returned on Saturday to face the Medina Bobcats. Natalia dominated the 1A program, out-hitting them 8-1 en route to a 9-0 victory in four innings of play.
Garcia picked up the win on the mound, as he allowed one hit, walked four and struck out eleven in the contest.
At bat: Zapata 2-2, Garcia 1-3-2RBIs, Castro 1-3-1run scored, Contreras 2-2-1RBI-2runs scored, Felker 0-1-2runs scored, Billalobos 1-2, Navarro 0-0-2runs scored, Arellano 0-3, Ruiz 1-2-1run scored and Gomez 0-1-1RBI-1run scored.
Defensive Put-Outs: Zapata 11, Billalobos 1.
The Mustangs finished the tournament in a strong manor, as they dominated the 1A Knippa Rockcrushers 11-0. Natalia out-hit the Crushers 7-1 forcing an additional three errors on the Knippa defense.
Zapata got the win on the mound for Natalia, as he pitched 5.0, allowed one hit, walked three and struck out seven.
At bat: Zapata 1-2, Garcia 0-3, Roberto Curiel 0-0-1run scored, Castro m1-4-2RBIs-1run scored, Contreras 1-3-3RBIs-1run scored, Felker 2-2-2RBIs-2runs scored, Billalobos 0-0-2runs scored, Arellano 1-2-1run scored, Ruiz 0-3-1RBI-1run scored and Gomez 1-2-1RBI-2runs scored.
Defensive Put-Outs: Garcia 7, BIllalobos 3, Ruiz 1, Martinez 1. Assists: Zapata 2, Contreras 2, Billalobos 1, Gomez 1.
All-Tourney: Natalia Senior Jeremiah Castro and Freshman Manuel Garcia received All-Tourney recognition for their performance in the tourney.
By Eric Smith