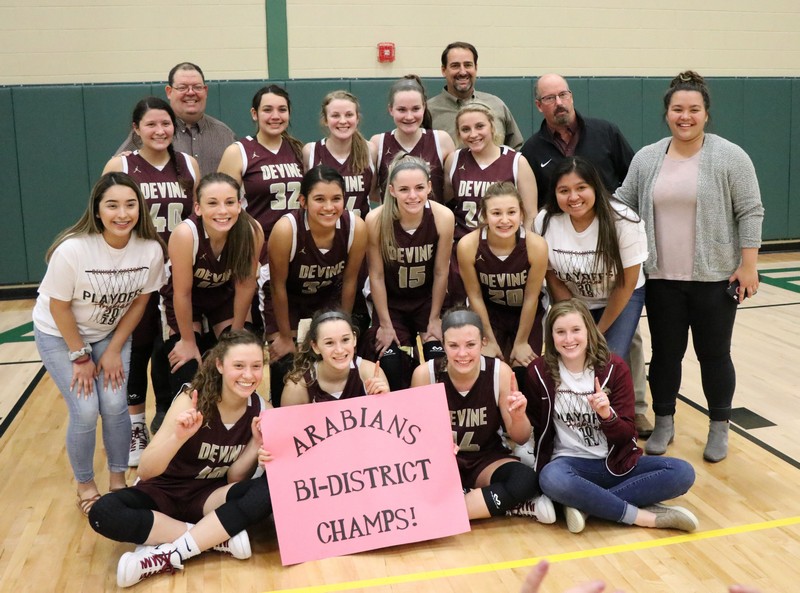 In a game of jump balls and offensive fouls, the Arabians faced the Navarro Lady Panthers (20-14, 6-6) in a Bi-District play-off game and came away with a 37-34 win.

The Varsity Arabians team is comprised of Seniors Alissa Stehle, Sierra Pompa, Preslee Quisenberry, Juniors Kaylee Howard, Janaee Wofford, Gabby Rodriguez, Clarissa Zamora, Sophomores Brianna Bowyer, Megan Runyan, Allyson Taylor, Madison Mata, and Freshman Macey Hein with managers Shelby Spivey, Leah Herrera, and Destiny Morales.
Coach Jim Sessions and his team led at the end of the first quarter, but Navarro took the lead and held it until the middle of the fourth quarter. Devine tied the score at 30-30 with 4:08 left in the final quarter and sank a jump shot, causing Navarro’s coach to call a time out.
Navarro tied the game up at 3:10 and pulled ahead with two free throws at 2:13. In bonus due to too many fouls, Devine sank a free throw, making the score 33-34 with 1:04 left. The Lady Panthers missed their free throw at 25 seconds and Macey Hein was fouled driving hard to the basket and sank her shot to make the score 35-34.
Navarro was called on a charge under the basket and Devine inbounded from under Navarro’s basket. Maddie Mata threw to Megan Runyan, who passed back, and Mata was fouled, sending her to the line. Mata sank a free throw with 2.9 left on the clock.
The Lady Panthers inbounded but Devine grabbed the ball in the struggle. The scorekeeper didn’t start the clock and sounded the buzzer, causing both teams to stop in the confusion. Devine took and missed a shot in the confusion.
The referees decided to reset the clock to 2.5 seconds and Devine inbounded the ball under their basket. Navarro fouled Preslee Quisenberry, sending her back to the line, and she made one free throw to make the score 37-34. Navarro attempted a long pass on the inbounds play, but Hein blocked the pass and time expired.
The Arabians are moving on to Area and will play in Pleasanton Friday night at 7:30 against Beeville Jones High School. Beeville is 27-7 overall and beat Rio Hondo in Bi-District.
Elsewhere in the area, Carrizo Springs beat Gonzales 59-56 and will face either Hidalgo or Robstown. Pearsall lost to La Vernia 37-43. Hondo lost to Cuero 35-43. Poth beat Hallettsville 56-40. George West beat Lytle 64-34. Dilley lost to Odem 51-56. Skidmore beat Natalia 62-19. Karnes City beat Columbus 58-41. Jourdanton lost to Aransas Pass 33-62.
The Warhorses won their final district game 55-50 against Carrizo Springs to earn second place in district. Hondo took first, Crystal City third, and Carrizo Springs fourth. The Bi-District game has not been announced at the time this was written.
By Dicy Chambers
Sports Writer